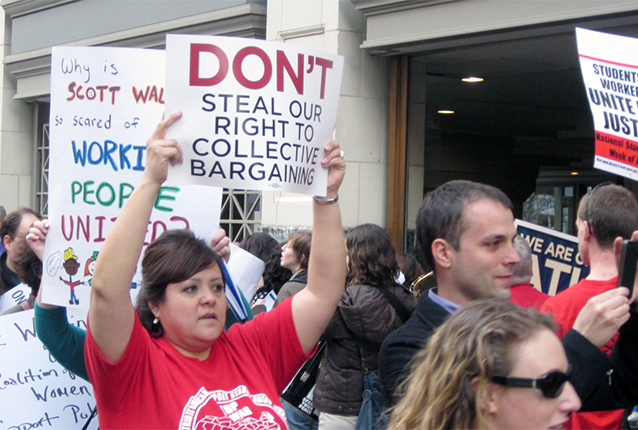 This primer on unionbusting answers frequently asked questions about the companies and firms who are set on opposing unions. Check out Unions 101 and Strikes 101 too!

What Is Unionbusting?
The term unionbusting describes the planned course of action to stop workers from organizing a union or to destroy a union already in the workplace. Because federal labor law is woefully outdated and ineffective in protecting and enforcing workers’ rights to form unions, it has become standard practice for employers to block workers’ from freely banding together to have a voice on the job, often through the use of unionbusters.

Why Do Employers Unionbust?
Employers who have a hostile, kneejerk reaction to the possibility of union organizing often deploy aggressive union-avoidance strategies, like hiring unionbusters. Employers often use unionbusters because they fear employees having a meaningful say on hours, pay, benefits and working conditions – a fear sold to them by the unionbusting industry at extravagant seminars and conferences. Our broken U.S. labor law, affording no real deterrent for unlawful conduct, creates an added incentive for employers to engage in aggressive unionbusting. Yet there can be high hidden costs to unionbusting for employers. The intimidating, prying nature of unionbusting campaigns can divide a workplace and may lead to low morale, less productivity and increased turnover. Such unanticipated consequences may negatively impact consumers and stakeholders. Unionbusting also may mean maintaining poor job standards that can drag down working conditions across industries and regions.

Who Are Unionbusters?
Unionbusters are professional consultants or lawyers who may represent a legal consortium or consulting firm and specialize in advising employers on how to thwart union organizing drives or how to decertify unions without (technically) breaking the law. These individuals or firms advertise their ability to manipulate our broken labor law system. Unionbusters usually self-identify as “union avoidance firms,” “management consultants” or “labor consultants.”

Unionbusters offer legal services, advice and consultation, training seminars, workshops and materials for management and supervisors, and a variety of targeted anti-union propaganda for distribution to employees, including videos, posters, leaflets, flyers and giveaways. Unionbusters’ sophisticated advice, training and materials  help an anti-union employer create a sense of dissension and division among employees during an organizing campaign and spread misinformation about the union before workers vote in a union representation election.  Additionally, these “consultants advise management on how to stall or prolong the bargaining process, almost indefinitely – bargaining to the point of boredom….”1

Why Haven’t I Heard of These Firms?
Unionbusters operate under the radar intentionally. Unionbusters often provide material and instructions behind the scenes to anti-union employers who then direct middle-management and supervisory staff to carry out and distribute the unionbuster’s advice and materials. In this way, the unionbuster does not deal directly with employees and, as a result, may avoid having to disclose financial reports about such activity to the U.S. Department of Labor. The unionbuster’s name or firm is rarely used or referenced in the anti-union materials distributed to employees, further masking the unionbuster’s involvement in orchestrating the anti-organizing campaign. Currently federal law requires little in the way of transparency or reporting, so anti-union employers and consultants have no incentive to divulge specific details about their work or the costs of this practice.

How Successful Are Unionbusters?
It is no coincidence that as the unionbusting industry has grown the rate of union membership has declined.  A unionbuster profiled in Fortune magazine boasted of preventing 32 of 35 of his clients’ organizing drives in one year.3  Unionbusters even go so far as advertising their rates of success. One firm, Labor Relations Institute, now boasts a money-back guarantee on its website: “If your organization purchases an LRI Guaranteed Winner Package and the union becomes certified, the Labor Relations Institute will refund the full cost of the package.”4

What Are Common Unionbuster Tactics?

More Reports and Articles on Unionbusting

Neither Free Nor Fair: The Subversion of Democracy Under the National Labor Relations Board
Author: Gordon Lafer, University of Oregon, American Rights at Work, July 2007

Download this report outlining the how the NRLB has failed to protect the rights of workers when forming a union: PDF (74 pgs)

Download this expose about The Burke Group, one of the largest bad actors in the anti-union consultant business, and its role in the war against workers at the Chinese Daily News: PDF (22 pages, 113KB)

Consultants, Lawyers and the ‘Union Free’ Movement in the USA Since the 1970s
by John Logan, London School of Economics, Industrial Relations Journal, vol. 33, no. 3, 2002.