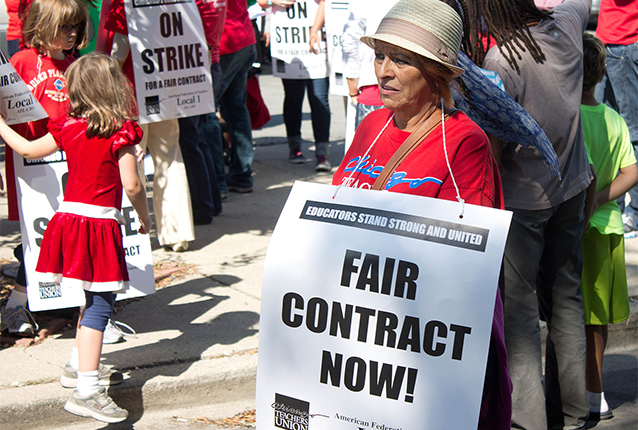 What is collective bargaining?

When does collective bargaining occur?

Who can collectively bargain?

What Topics Can Employees Bargain Over?

What happens when management and labor don’t agree?

Expanding the Theater of Bargaining

The vast majority of Americans do not have access to a collective bargaining process. Employer hostility towards unions chills organizing efforts.[11] Working people who wish to join together to raise wages and standards are seeking new “on ramps” to bargaining, particularly when their employers refuse to either recognize their union or bargain with them collectively. Sometimes, the NLRA structure of bargaining does not enable people to bargain with their “real” boss—the company that has actual economic control over their work but is not their direct employer. In those cases, employees are utilizing alternative strategies to build power and influence their wages and standards. For example, the cleaning staff for Target stores in Minnesota managed to win a direct agreement with Target in order to improve standards with the stores’ subcontracted cleaning firms.

Bargaining spaces can also be created through legislation. Childcare and homecare providers in Connecticut recently mobilized in support of a Low Wage Employer Fee, which would assess a fee on large, low wage employers in order to fund the state’s strained public care programs. While the fee did not pass, advocates won a Low Wage Employer Advisory Board, where care workers will have the chance to sit with employers, public assistance recipients, elected officials and other stakeholders to confer over recommendations to the governor and state legislature on how to address the public cost of low wage work.

Finally, working people who lack the right to collectively bargain are taking their “bargaining” demands to the public too. Domestic workers in Hawaii, Massachusetts, California, Connecticut and New York have successfully won “Domestic Workers’ Bill of Rights” laws that ensure they receive access to overtime pay and adequate workplace protections.

[1] AFL-CIO (2015, Apr. 28) On Raising Wages as the Standard for 2016 Presidential Candidates. Retrieved from http://www.aflcio.org/Press-Room/Speeches/On-Raising-Wages-as-the-Standard-for-2016-Presidential-Candidates

[3] Bureau of Labor Statistics. (2015, Jan. 23) Union affiliation of employed wage and salary workers by occupation and industry. Retrieved from http://www.bls.gov/news.release/union2.t03.htm.

[4] American Rights at Work. (2008  November). The Haves and Have Nots: How American Labor Law Denies a Quarter of the Workforce Collective Bargaining Rights. Retrieved from http://www.jwj.org/wp-content/uploads/2014/04/havesandhavenots_nlracoverage.pdf