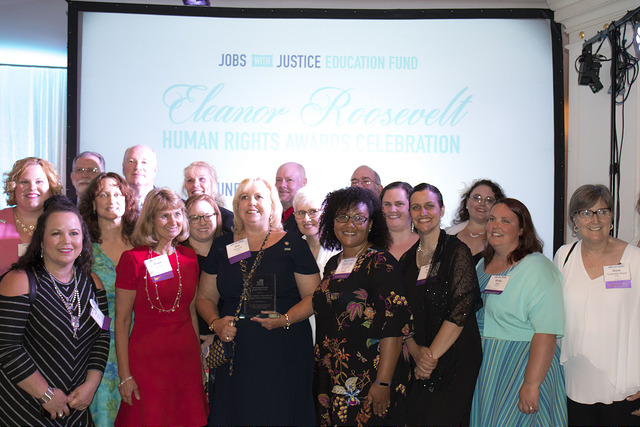 The yearly event pays tribute to outstanding individuals who follow in the footsteps of Eleanor Roosevelt and have upheld her belief that workers’ rights are human rights. Jobs With Justice Executive Director Sarita Gupta opened the program to commend this year’s awardees for providing hope for working people across the country through their innovative efforts and transformative campaigns.

“Tonight is a celebration of human rights trailblazers,” she said. “Working men and women are joining together across racial divisions and fighting back like never before, for the freedom to improve their livelihoods, their communities, and their futures.”

“We can ignite a revolution, spark social change, block this administration’s hateful agenda, and open the doors to sweeping changes in the workplace, in our environment and even at our borders. A dedicated minority can tip the scales to unleash our values into the world.”

Hundreds of CTUL members who work as retail janitors in the St. Paul and Minneapolis region blew the lid off of deplorable conditions in their industry where they often worked seven days a week for low pay and with no benefits or sick days. They secured the first and only metropolitan-wide union agreement in the industry with SEIU Local 26, benefiting a workforce primarily composed of immigrants and people of color. Through their campaign they recovered $2.1 million in stolen wages while winning long-term changes bringing an estimated $7.3 million in additional annual income into the poorest households in their region.

Veronica Mendez Moore, Gerania Mata, Pascual Tapia and Jose Cabrera took to the stage to accept their award. Pascual recounted his personal story, sharing how his, and his coworkers’ wages decreased as their work increased: “In 10 years, wages had gone down by $3 an hour, and the workload had doubled. And each cleaning company figured out a way to steal wages from its workers. They didn’t even have enough to pay us the minimum wage.”

The group of changemakers attributed their ability to accomplish the impossible to two key lessons: “The leadership we carry inside us can never be taken away,” and that activists must “focus our fights on corporate giants and hold them accountable for exploitation.” CTUL members vowed to continue fighting until everyone has better benefits and their voice heard in the workplace.

Ed Smith received the second award of the night, for his longstanding service and dedication to the labor movement. Ed has held many roles in his union – LIUNA – and will celebrate 50 years as a member this summer! And now as the President and CEO of Ullico, Ed ensures that the pension dollars of hundreds of thousands of union members are invested responsibly, and that union members have peace of mind through access to its insurance products.

Ed humbly accepted his award, saying what an honor it was to receive it alongside CTUL members and the West Virginia teachers. He finished off his speech with a nod to another esteemed labor leader, Samuel Gompers, who famously said:

Ed concluded: “That’s what the labor movement stands for.”

Jobs With Justice Organizing Director Erica Smiley introduced the final nominees of the event: the West Virginia Teachers and School Service Personnel. She spoke about their powerful strike that ignited solidarity and activism for public educators nationwide. “Teachers, bus drivers, cooks, aides, custodians, school office administrators, and secretaries united together and marshalled their power to improve conditions at West Virginia schools, and inspired educators across the country to be just as bold.”

AFT-WV President Christine Campbell, WVEA President Dale Lee, and WVSSPA President Linda Thompson came on stage to accept the award on behalf of their members who drove from all areas of the Mountain state to participate in the celebration.

WVEA President Dale Lee invoked Eleanor Roosevelt’s famous words, “You must do things you think you cannot do,” as a source of inspiration for struggles such as the 55 United campaign. Dale credited educators in West Virginia “who stood strong and united for nine days in a right-to-work state where strikes are illegal,” for drawing attention to the universal concerns among public employees and other working people across the nation. But he warned that the strike should not be the end of their story, as “we must take our state back” and “make students the foundation of everything we do.”

A school secretary, WVSSPA President Linda Thompson extended thanks to the support of administrators, board members, parents, students, legislators and community who were key in helping keep the West Virginia school employees “55 strong” throughout their great state. She continued, “We raised the bar. School service employees will now and forever more be given the respect that was long overdue.”

AFT-WV President Christine Campbell closed the presentation by sharing: “West Virginia began this movement because our districts are not corporations, our schools are not factories, and our classrooms are not assembly lines. Our schools are the heart and soul of our communities; those communities thrive when we invest in our children’s education. This award belongs to all the teachers and service personnel who had the courage to walk out for their students. And we know that when we come together collectively, we can make a difference.”

The lively ceremony culminated with the West Virginia teachers and school service personnel initiating a rousing chorus of John Denver’s “Take Me Home, Country Roads.” Others in the audience joined in, while many others watched, hopeful, teary-eyed and inspired.

Jobs With Justice Education Fund thanks everyone who participated and made the 14th Annual Eleanor Roosevelt Human Rights Awards Celebration a success! We appreciate the generosity of our event sponsors and auction donors, and the work of our host committee who made the event possible, and are looking forward to our continued partnerships. In case you missed it, check out photos from the evening, and you also can support our crucial work by making an online donation. 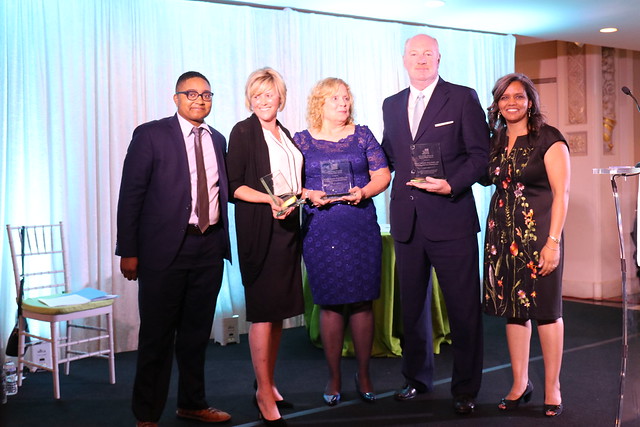