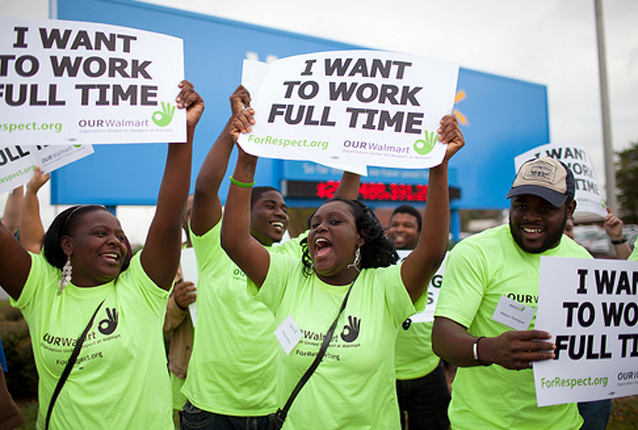 After facing years of ongoing strikes and protests from its own employees, Walmart announced plans today to give raises to nearly 500,000 of the company’s 1.3 million U.S. employees.

In a letter to Walmart associates, CEO Doug McMillon outlined a series of “comprehensive changes” to the company’s “hiring, training, compensation, and scheduling programs” that include increasing starting wages to $9 an hour by April and to at least $10 an hour by early next year.

OUR Walmart, the association of current and former Walmart employees that have made headlines for their annual strikes on Black Friday, credit the sweeping change in company policy to the persistent efforts of its members speaking out for better wages and adequate hours to make ends meet.

Of course, in a letter explaining his motivation for these changes, Doug McMillon made no mention of public pressure or worker strikes. Diverging from his predecessor Bill Simon, who encouraged disgruntled employees to simply “go to another company and another job,” McMillon credited the raises with what is best described as a sudden and newfound interest in the well-being of Walmart employees:

“We’re always trying to do the right thing and build a stronger business. We frequently get it right but sometimes we don’t. When we don’t, we adjust… When we take a step back, it’s clear to me that one of our highest priorities must be to invest more in our people this year.”

Even with today’s changes, Walmart will continue to have the highest CEO-to-worker pay ratio among Fortune 500 companies. McMillon’s own compensation rose 168 percent to $25.6 million in 2014. The Walton family, controlling owners of Walmart, constitute the richest family in America with the same wealth as the bottom 42 percent of Americans combined.

So it’s not surprising that the world’s largest private employer could easily do much more to address its workers’ basic human needs. As Emily Wells, a leader of OUR Walmart explained in a statement today:

“The company is addressing the very issues that we have been raising about the low pay and erratic scheduling, and acknowledging how many of us are being paid less than $10 an hour, and many workers like me, are not getting the hours we need. As a soon-to-be-mom making only $9.50 an hour, it’s very difficult to make ends meet with my part time schedule, which gives me only about 26 hours per week.

Especially without a guarantee of getting regular hours, this announcement still falls short of what American workers need to support our families.  With $16 billion in profits and $150 billion in wealth for the owners, Walmart can afford to provide the good jobs that Americans need – and that means $15 an hour, full-time, consistent hours and respect for our hard work.”

With Walmart’s track record, OUR Walmart is justifiably cautious about the company’s public commitments. The organization’s members have faced years of unlawful retaliation from the retailer for demanding many of the changes announced today. Moreover, the company’s alleged commitment to its employees hardly shines through when so many store associates – and even managers – have been forced to turn to online outlets like Gawker to air their grievances anonymously out of fear of losing their jobs.

In addition to the increase in wages, McMillon outlined a number of other changes to employee policy that clearly echo demands made by members of OUR Walmart.

The company plans to initiate a new program to offer some employees fixed schedules each week, although McMillon made no commitment to offer full-time schedules to associates. The scheduling announcement comes on the heels of recent groundbreaking laws to curb abusive scheduling at corporate retailers, such as the Retail Workers Bill of Rights that was passed unanimously in San Francisco last year.

McMillon also announced to the Associated Press plans to invest $100 million to the Walmart Foundation to “support programs that help advance careers for entry-level workers in the industry.” Once again, the company’s track record is at odds with his promises. As Walmart’s own internal compensation documents reveal, the retail giant systematically places limits on the ability of associates to advance. As one long-time store manager described, the home office has systematically slashed employee benefits over the last two decades.

Regardless of the reason for Walmart’s announcement today, one thing is clear: OUR Walmart has no plans of letting up the pressure:

“Until we see the increased wages in our paychecks, the hours on our schedules and the rehiring and respect of our co-workers, we will keep standing up for better jobs at Walmart.”

And they’re not alone. With recent polls indicating the majority of Americans support an increase in the minimum wage, and as strikes and protests calling for $15 an hour and full-time schedules spread through other industries, we’re finally seeing the cumulative effect of years of organizing and demonstrating.