Three Things Walmart Can Do To Shock Its Critics 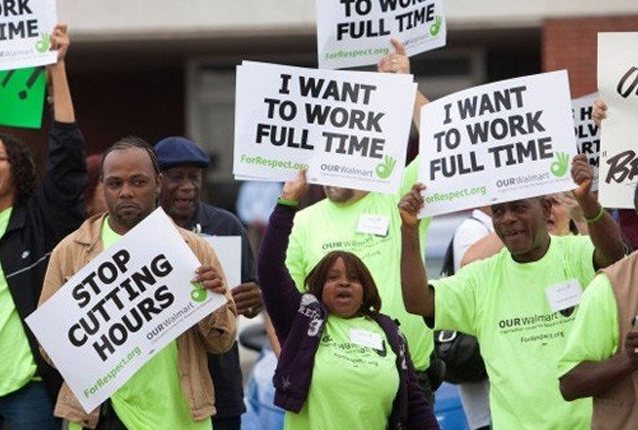 OUR Walmart members demonstrate for adequate hours and decent wages.

Walmart, the world’s most profitable retailer, is starting to show signs of decline. Last week, the company reported a 21 percent dip in profits over the fourth quarter and a decline in its same-store earnings over that same period, leading a financial analyst to downgrade the company’s stock rating on Friday. Recent reports suggest a growing list of issues likely account for the company’s weakening financial prospects, including deep cuts to employee hours, empty shelves and inadequate staffing.

One solution to Walmart’s woes may be to do what it has been avoiding for decades: listen to its employees.

For years, the company has refused to meet with OUR Walmart, an association of current and former employees that have spoken out, protested and gone on strike to demand better hours, decent wages and respect on the job. In response, the company has attempted to silence or even outright fire members of OUR Walmart and now faces a federal prosecution for alleged violations of labor law.

Here are some ways Walmart could tackle their latest woes – and do right by their workers in the process.

By providing adequate hours, as members of OUR Walmart have demanded, the company could reverse its inability to keep its shelves stocked.

“The merchandise is in the store, it just can’t make the jump from the shelf in the back to the one in the front.… There’s not the people to do it.”

Walmart defines “full-time” work as 34 hours per week and has been accused of systematically slashing hours over the last decade. According to one store manager, Walmart’s home office has imposed restrictions on the number of full-time employees at each store. The company previously required 60 percent of employees to be full-time and has now cut that down to 40 percent full-time, 40 percent part-time and 20 percent temporary workers who are not entitled to any benefits.

“We’re not getting as many sales because there’s simply no one to help the customers throughout the stores.… I asked, ‘Why can’t we have enough hours to make the store work?’ They said, ‘It’s orders from Home Office.’”

Even at Walmart’s definition of full-time, an employee earning the average wage of $8.81/hour makes just $15,500 per year, placing them well below the federal poverty line. But the company could easily choose to raise wages without suffering a profit loss.

Ken Jacobs, chairman of the University of California Berkeley Center for Labor Research and Education, estimates that increasing the minimum wage to $10.10 an hour, as President Obama has recently endorsed, would increase Walmart’s labor costs by less than 1 percent. If the entirety of that cost were passed on to consumers, that adds up to “about a penny per $16 item,” according to Jacobs.

Similarly, a recent report by Demos indicated that Walmart could easily afford to raise wages by $5.83 an hour for its lowest-paid employees, simply by redirecting funds it currently spends buying back its own stock.

Walmart should choose to invest in its employees instead of stock buy-backs, which contribute nothing to the economy.

With such low wages, many Walmart employees are forced to rely on taxpayer-funded programs, such as food stamps and Medicaid. One study showed a single 300-employee Walmart Supercenter in Wisconsin may cost taxpayers anywhere from $904,542 to nearly $1.75 million per year, or about $5,815 per employee. Researchers at the Berkeley Center for Labor Research found that “Walmart employees rely on taxpayer-funded health care about 40 percent more than families of all other large retail employees.”

The company itself also benefits from federal assistance programs. Eighteen percent of all total food stamp dollars are spent at Walmarts across the country, and congressional cuts to the SNAP program last fall are often cited for contributing to the company’s fourth-quarter profit loss.

Taxpayers should not be directly subsidizing a company that earns $476.3 billion in annual revenue and compensates its top CEO millions each year, simply because Walmart refuses to pay a decent wage.