Navient Owes the Federal Government a Lot of Money. Why Isn’t Anyone Collecting? 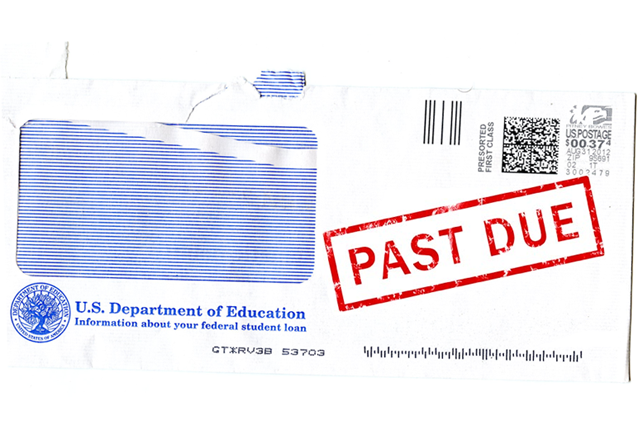 For the millions of Americans drowning in debt, non-payment is not an option, and student debt is the worst kind of debt to have. As Senator Elizabeth Warren once remarked, the powers of student-loan debt collectors “would make a mobster envious.” If you’re a company that holds student debt, on the other hand, not paying what you owe is apparently not a big deal.

One of the largest student loan servicing and debt collection companies is actually in debt too. Navient (formerly a division of Sallie Mae) – the same company that harasses borrowers when they default on their loans – owes the U.S. Department of Education, but it seems that no one is collecting. More than five years ago, the federal government discovered that Sallie Mae – a company it contracted with to service student loans and collect on students’ debts – owed taxpayers $22.3 million because of government overpayments. An audit by the Department of Education eventually determined that Sallie Mae had extracted the money by abusing a federal program intended to help smaller lenders and ordered that the debt be repaid immediately. After years of not repaying this debt, Navient spun off from Sallie Mae and agreed to be responsible and indemnify all claims, actions, damages, losses or expenses priorly held by Sallie Mae.

Navient – the same company that harasses borrowers when they default on their loans – owes the U.S. Department of Education, but it seems that no one is collecting.

But to date, the Department of Education has yet to collect on the $22.3 million Navient owes them, despite their impressive track record in recouping debt from the millions of Americans who borrowed money to afford college. In fact, they haven’t even tried to recover the money. That got us thinking: What if Navient’s $22.3 million bill was treated the same way as a student loan by the Department of Education?

The truth is, Navient would actually owe the federal government a lot more than $22.3 million. In 2009, the interest rate on student loans was 5.6 percent and 6.8 percent for subsidized loans and unsubsidized loans respectively, with a 1.5 percent origination fee. So taking interest into account, the Department of Education would rake in an extra $8,964,463.53 (calculated here), but that’s only if Navient made all of their payments on time over 10 years.

But Navient hasn’t made any payments. In other words, Navient is in default on their Department of Education loan. And if Navient were a normal borrower, that default would mean it would no longer be eligible for federal financial aid, and many states would cut off any aid until it started paying back this debt as well. This would have a big impact on Sallie Mae and Navient (a former division of Sallie Mae), which benefited from the $5.6 million in grant money it got last year to renovate their offices in Delaware and received $5.1 million for housing its offices in the state back in 2011. For many students trying to go back to college, losing grants would put their educational dreams on hold.

And of course, if the Department of Education were to hold Navient accountable like it does other student debtors, it would make sure that creditors knew Navient wasn’t paying back their loan. Right now, Moody’s credit rating for Navient is “Ba3” – which means that they already have significant credit risk. What would it be if they knew that Navient hadn’t paid back this debt, though? Navient could quickly find itself as a high credit risk (just one below their current rating), and it would suddenly become much harder for Navient to get others to issue them credit, which in turn would impact investors’ choices about their shares of the company, just like a low credit rating can hurt a debtors’ chance of getting access to other forms of credit.

The Department of Education could also use its power to garnish Navient’s income, for example the $154,416,751 the company was paid by the department in 2014 alone. The department can actually take up to 15 percent of a defaulted borrower’s disposable pay, which, in this case, would nearly cover the entirety of the debt Navient owes. Undoubtedly, this would rattle the company’s board of directors, which is tasked with guiding Navient toward financial success. They’d probably have some tough questions for management about why this was happening, questioning their fiscal responsibility, the same way many media pundits and politicians question student debtors’ fiscal responsibility when they default.

Furthermore, when you default on your loan with the Department of Education, you end up owing a lot more above the original amount you borrowed. In fact, “loan debt will increase because of the late fees, additional interest, court costs, collection fees, attorney’s fees, and any other costs associated with the collection process.” Many debtors see their interest rate go above 25 percent once they’re in default, and up to 40 percent of the principle can be added in as a fee or penalty for default. This unpaid debt would quickly become very expensive for Navient, the same way it does for so many individual borrowers.

But of course, Navient doesn’t get the same default treatment from the Department of Education. This isn’t how the agency treats one of its largest debt servicers and collectors… just regular student debtors struggling to pay back their loans. This nightmare is a reality for the 7 million Americans who are in default on their federal student loans, and it’s why some of the best and brightest high school students aren’t going to college. It’s yet another example of the Department of Education’s complicit role in the student debt crisis and calls into question who the department is serving – “too-big-to-fail” financial institutions or those who are trying to get a college education.

5 Comments on “Navient Owes the Federal Government a Lot of Money. Why Isn’t Anyone Collecting?”