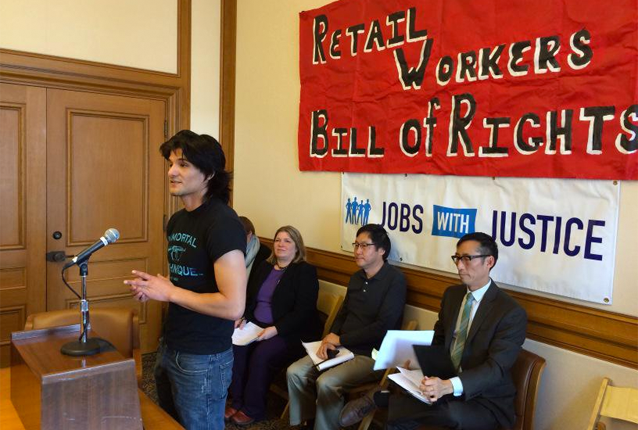 Mark Ortiz, a retail worker at Macy’s Union Square in San Francisco, explains how important advance scheduling is to him personally – and how it will lift standards for everyone.

UPDATE: On December 5, 2014, the Retail Workers Bill of Rights officially became law in San Francisco, 10 days after the Board of Supervisors unanimously approved the ordinances for the second time. This legislation will go into effect on January 5, 2015.

San Francisco will likely soon adopt a landmark bill of rights for an estimated 40,000 hourly employees of massively profitable chain stores and restaurants. Once enacted, the ordinances will serve as the first meaningful policies in the nation to ensure more people have job schedules with enough hours to plan their lives and take care of their loved ones.

The San Francisco Board of Supervisors voted unanimously in favor of the Retail Workers Bill of Rights for its second and final vote yesterday. The package of legislation is now headed to Mayor Ed Lee’s desk, where it is expected to be signed into law.

Explaining the need for a bill of rights, Jobs With Justice San Francisco executive director Gordon Mar said the following:

“All families need strong wages, stable hours and sane schedules to build a good life. But too many of our neighbors who serve our food, stock our shelves and sweep our floors have jobs that grant too few hours on too short notice and require them to be at the beck and call of their employers.”

The Crisis of Scheduling

The retail and food service industries are a growing employment sector in the United States, but the jobs are predominantly poor quality, with low wages, part-time schedules and limited employer-provided benefits.

But meager wages alone aren’t to blame. Unpredictable, erratic schedules and inadequate hours keep many people who work in banks, grocery and clothing stores and restaurants living on the brink.

In a growing practice known as “just-in-time scheduling,” many employers use sophisticated computer software to analyze a number of factors, from weather conditions to sales traffic, in order to create schedules that maximize revenue while requiring employees to always be available.

As a result, hourly retail employees have little to no ability to plan for their lives, including basic necessities such as taking care of a loved one, arranging for child care, or even getting a second job to help make ends meet. Approximately half of all hourly workers report having limited control over their work hours,< according to the Retail Action Project. In a survey of retail employees in New York City, only 17 percent reported having a set schedule, while more than half only knew their schedules within a week. Jannette Navarro, a 22-year-old single mother working at Starbucks summarized the chaos of her erratic schedule succinctly:

“You’re waiting on your job to control your life.”

Jannette is not alone. The retail and food service workforce is largely made up of women, but the 1.3 million who are working in retail live in or near poverty, according to Amy Traub of Demos, a public policy organization committed to reducing income inequality. In a study released in June, Traub predicts that if present trends continue, “nearly 1.4 million women working in retail and the nearly 2.5 million family members they help to support will be living in or near poverty in 2022.”

By providing stable and sufficient schedules, large retailers could remove a “major obstacle for women trying to work their way out of poverty with retail jobs,” according to Traub.

After a damning New York Times article exposing Jannette Navarro’s unnecessarily stressful work schedule, Starbucks executives said they would revise their scheduling policies for 130,000 employees. But despite widespread protests from men and women employed at Walmart and fast food chains to raise wages and provide stable schedules, companies like McDonald’s and Walmart continue to intentionally deny employees more hours and implement scheduling systems that wreak havoc on their employees’ ability to take care of their families. Instead of waiting for corporations to act, advocates like Jobs With Justice San Francisco are galvanizing community support to push policymakers to address abusive scheduling practices in the retail industry.

The Retail Workers Bill of Rights is a package of two separate pieces of legislation – the “Hours and Retention Protections for Formula Retail Employees,” introduced in July by Supervisor Eric Mar, and the “Fair Scheduling and Treatment of Formula Retail Employees,” introduced by Supervisor David Chiu in September. Together, the ordinances contain five major provisions to curb abusive scheduling practices at corporate retailers:

The Retail Workers Bill of Rights is focused on the largest, most profitable retailers operating in San Francisco. It will only apply to businesses with 20 or more locations globally and 20 or more employees in San Francisco, which captures the vast majority of establishments that fall under the city’s “formula retail” definition. Under San Francisco law, chain stores are categorized as “formula retail” if they have 11 or more locations, which covers big box stores such as Target and Lowe’s, fast food franchises like McDonald’s and Taco Bell, chain restaurants such as Olive Garden and Cheesecake Factory, fashion retailers like the Gap and H&M, grocery stores like Trader Joe’s and Whole Foods, and other corporate businesses.

A Growing Movement for “Jobs With Just Hours”

Just as minimum wage increases and paid sick days laws have gained traction around the country, the movement for jobs with just hours continues to gain steam. Jobs With Justice San Francisco, the community-labor coalition that championed the Retail Workers Bill of Rights, is hopeful that comparable “jobs with just hours” policies will spread to other cities. Other coalitions in the Jobs With Justice network are exploring the potential to pass similar policies as early as next year.

Supervisor David Chiu is moving on to the state assembly next year and has already announced plans to introduce a statewide version of the Retail Workers Bill of Rights in 2015. And in Congress, policymakers introduced federal legislation called the Schedules That Work Act earlier this year.

Meanwhile, people across the country are continuing to organize and demonstrate for fair wages and schedules. OUR Walmart, an organization of current and former Walmart associates, plans to go on strike this week on Black Friday, the busiest shopping day of the year.

The combination of public protests and innovative municipal policies like the Retail Workers Bill of Rights could potentially open up a new front in the battle to end abusive scheduling and help make America work for those who work for a living.