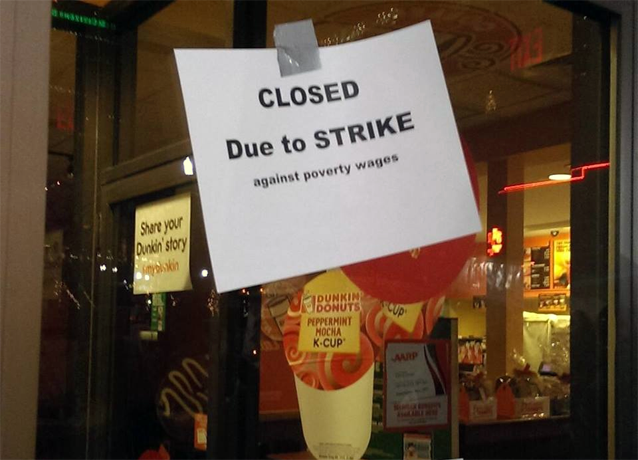 Photo from Low Pay Is Not Okay

On Thursday, in 100 different cities around the country, fast-food workers across the country are walking off the job to speak out against unsustainable, poverty-level wages paid to workers in the restaurant industry. These men and women work for our nation’s most profitable food chains and still aren’t able to raise families and make basic ends meet. That’s why workers involved in Thursday’s protests are calling for a raise in fast food wages, from the $7 or $8 being paid currently to $15 an hour, which would offer employees an opportunity to get out of poverty and participate in the economic recovery.

More than 20 Jobs With Justice coalitions—including Missouri Jobs with Justice, Atlanta Jobs with Justice, and Colorado Jobs with Justice—are engaging in events and actions as part of this week’s movement and have been heavily involved in supporting local fast-food workers’ campaigns.  Interested in participating in a rally on Thursday? Click here to find an event near you.

Thursday’s protests are projected to be larger than any of the fast food strikes organized over the last year, and are likely to spark increased debate and momentum in the movement to raise pay and fix the precarious employment conditions of low-wage workers. Workers are continuing to speak out despite the fact that many of the courageous fast food employees who have already participated in the strikes have been retaliated against, lost pay, and risked their livelihoods in order to make a difference in the lives of millions of their colleagues.

It’s clear that America needs a raise, and now workers and communities are coming together to take action instead of waiting for   Congress or major corporations to do the same.  Last week, thousands of protests were held on Black Friday in support of Walmart associates’ continued demands for better pay and working conditions.  And in a major local victory, City Councils in Maryland’s Montgomery and Prince George’s counties as well as Washington state approved meaningful minimum wage increases for certain workers.

Everyone deserves the freedom to earn a decent living. As holiday season approaches, it’s important that we take a minute to reflect on the fact that no matter who you are or where you live, if you work full time, you should be able to afford to feed yourself and your family.  But our economy isn’t working for millions of working people today, because when workers can’t afford basic necessities, it lowers their purchasing power and slows the economic growth for everyone. Until fast food giants wake up to the fact that Americans are uniting behind the demand for profitable companies to pay their workers a fair wage, we will continue to stand with fast food and other low-wage workers in their fight for justice.