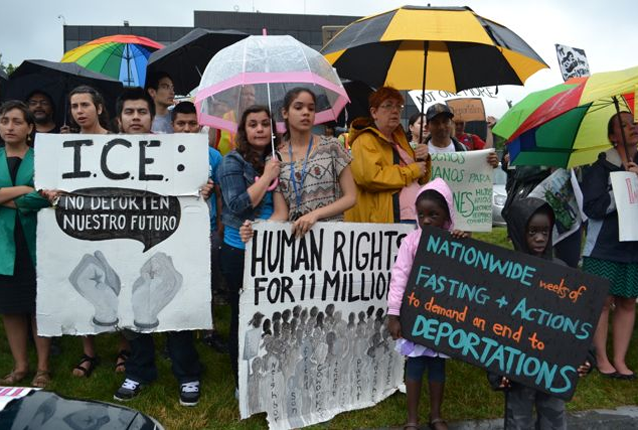 Photo from Massachusetts Jobs with Justice

Although President Obama has called deportations “heartbreaking,” immigrants in the United States continue to be separated from their families at a record pace. Nearly two million deportations have taken place under the Obama administration to date. On March 13, the President finally ordered the Department of Homeland Security (DHS) to review its deportation practices but has rebuffed calls to use his executive powers to halt deportations for individuals who haven’t committed serious crimes.

A growing chorus of civil rights, faith, legal and human rights advocates are criticizing the administration’s deportation policy as unjust, arbitrary and counter to the spirit of immigration reform supported by the president and an overwhelming majority of Americans. There are myriad reasons why deportations should be curbed, but to start, the system makes it too easy for workers to be susceptible to abuse on the job.

There are cases of brave whistleblowers coming forward to report abuse on the job and collaborating with community groups, worker centers and unions to ensure their rights are protected. But too many immigrant workers are understandably afraid to speak out knowing how many of their friends and neighbors have been separated from their families.

Bad employers send a powerful, chilling message in the workplace when they deport employees for speaking out. It’s so powerful, in fact, that the mere threat of deportation often looms large enough to silence workers from blowing the whistle and exercising their labor and civil rights.

Recently, a group of workers employed on a publicly funded project in the Washington, D.C., area organized to protest reported wage theft by their employer, only to have their immigration status used in retaliation against them. As a result, more than half of the workers were fired, and many workers and their family members were placed in deportation proceedings.

It’s not just immigrant workers and families who suffer. When unscrupulous employers illegally lower labor standards for certain groups of workers – including undocumented immigrants – they actually depress wages and conditions for all workers. By driving down labor standards to the lowest common denominator, they make it harder to enforce laws and standards even for native-born workers and harder for employers who play by the rules to remain competitive.

Not surprisingly, most Americans are against the deportation of workplace whistleblowers. A March 2013 survey of registered voters by Belden Russonello Strategists found that 80 percent agree that “immigrant workers who blow the whistle on abusive employers are helping U.S. workers defend workplace standards, and they should have the opportunity to stay in the United States to work toward citizenship.”

Communities and commonsense policymakers have had enough of the deportations. Gov. Jerry Brown (D-Calif.) signed the TRUST Act into law last year, a bill that gives law enforcement much more leeway to respond to immigration detainer requests and sets a minimum standard to ensure that those with most low-level, non-violent offenses are not wastefully held for deportation purposes. The Massachusetts legislature is moving closer to adopting a similar bill. Through the POWER campaign, we are working to ensure policies are included in any comprehensive immigration reform legislation to ensure all immigrant whistleblowers who come forward against abuse are protected from deportation to ensure better workplace standards for immigrant and U.S. workers alike.

Workers’ rights groups, including many in the Jobs With Justice network, continue to bring attention to the deportation crisis – through vigils, forums, strategy sessions and protests. On April 5, Eastern Tennessee, Rhode Island, Chicago, Northern Illinois, North Texas, DC, Portland and Massachusetts Jobs with Justice coalitions are all participating in a “Two Million Too Many,” national day of action event to push the White House to take immediate action to formally address the deportation crisis.

The tide is turning, but we need stronger executive action to end our country’s unjust deportation policy. When immigrant workers’ rights are protected, workers across the board do better. We need to stand up for immigrants who work in unsafe, abusive jobs with the constant threat of deportation hanging over them. By doing so, we stand up for the rights of all workers.

Tags: deportations, Not One More