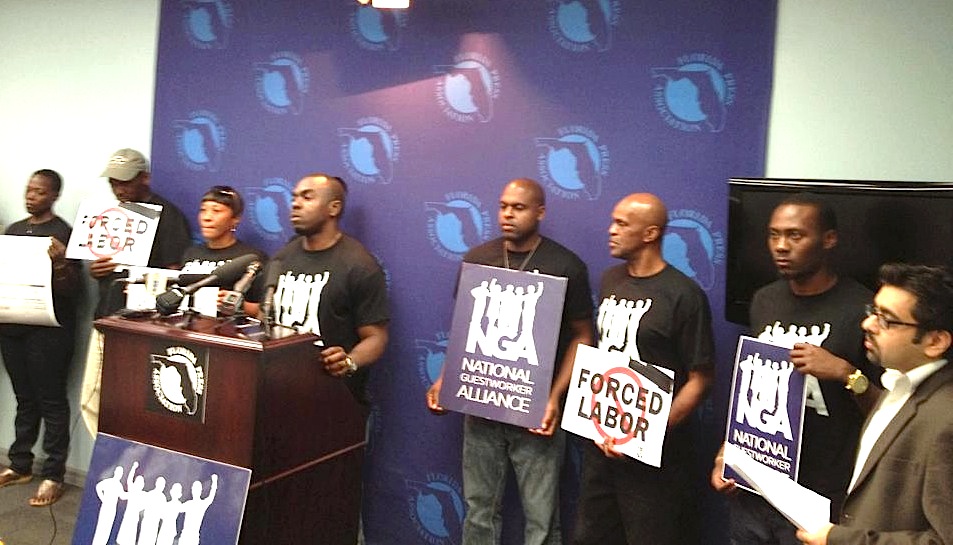 Jamaican guestworkers fighting against labor abuse  won a breakthrough pledge from federal immigration authorities not to collude with their employer in deporting them.

These guestworkers came to Florida to clean condos this summer and were alarmed at what they experienced — extremely unsafe living conditions and many reported working without wages. Instead of suffering in silence, they blew the whistle on their employer.

Given our current broken immigration system, it is far too easy for unscrupulous employers to contact Immigration and Customs Enforcement (ICE) to deport workers for speaking out against unfair or abusive conditions on the job.  But in an unprecedented written communication, the Miami ICE field office invoked the authority of two key documents that are supposed to govern how ICE operates internally: the December 2011 Memorandum of Understanding between the Departments of Homeland Security and Labor, and the June 2011 Prosecutorial Discretion Memo that specifically limits enforcement against certain victims, witnesses, and plaintiffs.

This breakthrough comes after years of community pressure on ICE from groups like Jobs with Justice and the National Guestworkers Alliance not to carry through on employer threats of retaliatory deportation. In 2008, workers from India exposed how ICE was colluding with their employer to prevent them from expose labor trafficking. Since then, workers have fought for this protection against employers like Hershey’s in 2010 and Walmart in 2012.

With this protection in hand, the Jamaican workers’ civil and labor rights will be secure as they fight to be made whole by their employers, and to help advocate for immigration reform with strong worker protections. The pledge they won from ICE is also a precedent for other groups of workers to secure similar guarantees during civil and labor rights disputes.

Join with us to ensure POWER Act policies are included in immigration reform to ensure all immigrant whistleblowers who come forward against abuse are protected to ensure better workplace standards for immigrant and U.S. workers alike.