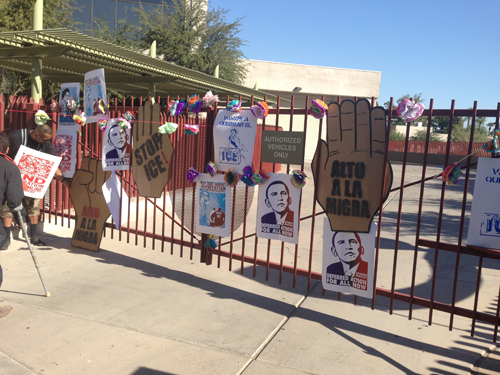 This weekend Jobs with Justice leaders joined in the fight to address the deportation crisis that continues to put workers’ rights at risk. Alvaro Ramirez and Bliss Requa-Trautz of Western Massachusetts Jobs with Justice traveled to Phoenix to join with hundreds of day laborers and immigrant rights advocates for a conference and demonstration against Immigration and Customs Enforcement’s (ICE) policies to deport immigrant community members.

The Not One More conference encouraged advocates to come together to pressure President Obama and Congress to halt the deportation machine. Even during the government shutdown, ICE continued to deport more than 1,100 people a day. In fact, it has become far too easy for bad employers to manipulate the deportation system as a weapon against their employees, threatening retaliatory deportation of immigrant workers who try to organize or speak out about wages and working conditions.

“The administration needs to use its authority to halt deportations while immigration reform is being debated. With that assurance, workers would be more confident to begin to stand up for their rights on the job. Once we remove the threat of deportation, we will have a much wider opportunity to organize people and make a significant change in workplace conditions,” explained organizer Bliss Requa-Trautz.

Alvaro Ramirez, a father and an undocumented seasonal farmworker in Springfield, Mass., decided to risk traveling to Arizona in order to stand up for his rights and demand justice for all workers in his position: “My wife and I both work at the same farm. I feel that after years working here, we should receive a better wage. But with the constant threat of detention and deportation, complaining about working conditions is not even an option. I worry I would lose my job, or worse – that the boss would call immigration. We need a stop to deportations.”

Already this month,  Jobs with Justice leaders have been in the streets and in the halls of Congress demanding that the House pass comprehensive immigration reform legislation that includes strong worker protections.

After activists in Tucson chained themselves to a bus transporting 70 people in deportation proceedings, ICE closed its local offices for the duration of the Not One More conference. Civil disobedience will continue to be part of our efforts to put pressure on the president and members of Congress to press for immigration reform and to encourage the administration to stop its policy of deportations.

Tags: deportation, ICE, Not One More