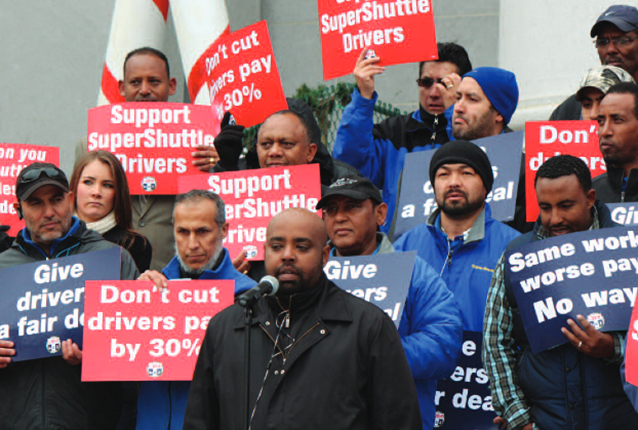 For years, Denver SuperShuttle drivers have been fighting for dignity and respect and an end to corporate abuse. Now, with the support of the Denver metro area community, they are getting closer to victory.

Despite the airport van service’s growth and profits, SuperShuttle drivers face harsh working conditions and unjust pay. Nearly 100 SuperShuttle drivers in Denver finally had enough, and began organizing for a union with the Communications Workers of America (CWA) in 2009. They overcame fierce resistance from company management and voted to form a union in October 2011. Yet their journey to secure a fair contract with SuperShuttle was just beginning.

Instead of negotiating out a contract quickly and fairly, the transportation company dragged out bargaining while imposing negative policies on drivers to weaken their support of the union. The company even issued what it deemed to be its “last, best and final offer” with terms that included pay cuts and more restrictions on work hours. SuperShuttle drivers rejected the contract by 93 percent, and then the union filed charges with the National Labor Relations Board (NLRB) to contest the bogus contract and to reopen bargaining.

This spring, SuperShuttle slashed drivers’ wages by 30 percent – a pay cut that could put many of these hard working men and their families into poverty, making them eligible for food stamps and other public support systems. Thankfully, at the end of August the NLRB ordered SuperShuttle to rescind the sham contract it imposed on its drivers in Denver and to restore their lost wages and benefits.

Earlier this summer, Colorado Jobs With Justice called for a Workers’ Rights Board hearing to learn firsthand from the drivers about their working conditions and the harassment they faced at the hands of their employer.

At the hearing, drivers testified to the issues they faced on the job. They explained that SuperShuttle management tripled their fees, imposed arbitrary fines, cuts wages by nearly 30 percent, and fired or suspended workers for minor infractions. Workers also detailed how the company instituted intrusive surveillance in the vehicles and shared stories of SuperShuttle managers leveling racial taunts and threats. The drivers also alleged unionbusting on behalf of the company, claiming that driver Negede Assefa was illegally fired for his efforts to improve the drivers’ working conditions.

Members of the Workers’ Rights Board, a board composed of local faith, academic and political leaders from Denver, were moved and inspired by the stories and committed to supporting the drivers in their battle against the company. Following the hearing, the board issued a report of its findings.

As news of the issues facing SuperShuttle workers spreads, community support continues to increase. In the meantime, the drivers are staying determined that the NLRB will help them hammer out a settlement with the company and they can finally secure the contract and a meaningful voice on the job they’ve been working so hard for.

1 Comment on “SuperShuttle Drivers Fight for Justice and Dignity”