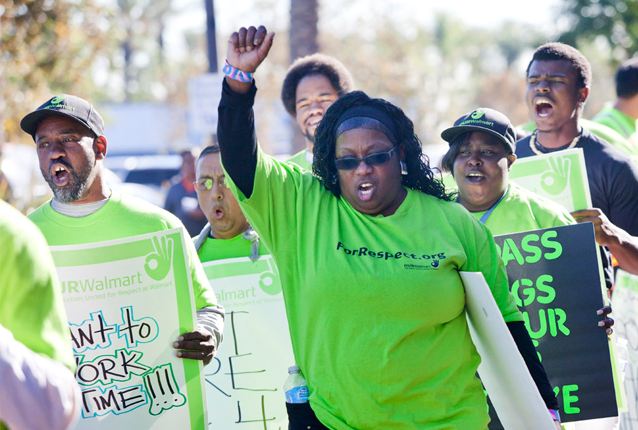 Walmart employees picket outside of the Walmart store in Pico Rivera, California. Photo via Flickr.

In a new trend, low-wage employees at some of the most profitable companies are turning to social media to expose rampant abuses and violations of labor law.

Walmart associates could see more hours in their future through a new company program called “Access to Open Shifts.” What started as a pilot project in Texas has now been implemented at all 4,000 U.S. stores and will allow employees to sign up for available slots through the company’s internal scheduling system. This recent step in the right direction comes after years of pressure from OUR Walmart, the association of current and former Walmart employees who have demanded more hours and stable work schedules from the retailer. Most recently, OUR Walmart members launched a petition on coworker.org to demand the company stop cutting hours. After nearly 20,000 signatures were collected, Walmart announced the new scheduling program.

While Walmart would never admit to being influenced by activists – even its own employees – the timing of this new program may lend credibility to a rising trend among low-wage workers: if your employer won’t listen, take your cause to the Internet.

Walmart also recently updated its pregnancy policy under pressure from several expecting mothers and women’s rights advocates. As one Maryland mom involved in the activism explains, the women connected with each other over Facebook and formed the “Respect the Bump” campaign from there:

“Respect the Bump started with one of the five workers from California named Girshriela. She actually starting posting things [online] and wanted to know concerns about pregnant women at Wal-Mart… [We] communicated from then on out, like, ‘What could we do to change things?’ So … other pregnant women didn’t have to go through these things that I did.”

In fact, since its founding, OUR Walmart has largely depended on social media to swell its ranks. Members connect to fellow employees through Facebook, start conversations about the situation at each other’s stores, share horror stories, and eventually, many workers join the organization.

But Walmart employees aren’t the only ones turning to the Internet to be heard.

Across the retail sector, hourly workers and even salaried managers are reaching out to journalists through anonymous emails in order to get their stories published to a wider audience. Gawker has recently featured two different series based on emails from whistleblowers at retailers – one highlighting the familiar horror stories from employees at Walmart and another series from employees at Target experiencing nearly identical abuses. OUR Walmart even set up its own site for gathering complaints and has received messages from workers at nearly three out of every four Walmart stores in the country. Other whistleblowers, such as these two former McDonald’s managers – whose jobs are no longer at stake – granted interviews to journalists after first sharing their stories online.

These stories share a few common refrains. Most obviously, workers at these extremely profitable companies simply aren’t paid enough to make ends meet. At Walmart, the nation’s largest employer, a “full-time” associate (defined as 34 hours per week) earns an average wage of $8.81/hour (or just $15,500 per year), placing them well below the federal poverty line. With such low wages, many Walmart employees are forced to rely on taxpayer-funded programs, such as food stamps and Medicaid. One study showed a single 300-employee Walmart Supercenter in Wisconsin may cost taxpayers anywhere from $904,542 to nearly $1.75 million per year, or about $5,815 per employee.

While finding other employment opportunities remains a myth, many of these low-wage workers end up stuck – unable to quit and with no genuine opportunity to advance. As one Target employee wrote to Gawker:

I would like to go to college, but I honestly cannot afford it because I need to work as much as possible to just make ends meet.

Another recurring complaint is the abusive scheduling practices used by these employers: many workers want to work full-time but are only given part-time schedules. According to the Bureau of Labor Statistics, nearly eight million Americans are involuntarily working part-time, an 80 percent increase since 2006. Without adequate hours to earn a living, it’s no surprise that one in four involuntary part-time workers lives in poverty.

Moreover, many low-wage employers put workers at the whim of irregular and constantly changing schedules. In a study of 17 major corporations, only three gave more than one week’s notice of schedules. Given too few hours on too short notice, it’s next to impossible for employees to get a second job, let alone schedule medical appointments or arrange for care for their loved ones. Often, the flexibility demanded of employees is not reciprocated by the employer. One woman, who claims she was hired by Target after being assured she could leave work to take care of her family at times, said the reality was far different once the job started:

“When I did have to leave work to pick up a sick child, or miss a shift to stay home with a sick child, I was treated horribly by management.”

Why have so many people taken their case to the Internet? For one thing, there is protection in anonymity. With so many workers facing retaliation for speaking out, it’s clear that standing up for your basic rights can put your livelihood at risk. While many workers recognize that forming a union could improve their situation, they fear the risk of retaliation from radically anti-union employers. As one assistant store manager claimed, “Target would close a store that voted in a union and reopen another one.” This could be the chilling effect of Target’s successful unionbusting efforts, but in Walmart’s case, it’s no idle threat. The NLRB has even brought a case against Walmart alleging illegal retaliation. Unfortunately, under our current broken labor law, toothless penalties rarely dissuade employers from unionbusting, and companies are even incentivized to violate the law with a myriad of methods to prevent workers from exercising their rights.

Perhaps the best explanation for this new trend is simpler: it works. As social media and other online platforms make it easier than ever to access information, and each other, it will be harder and harder for employers to prevent the connections and conversations that bring workers together under a shared purpose. And as more companies respond to online pressure, more workers may come forward to expose abuse and come together to demand change.