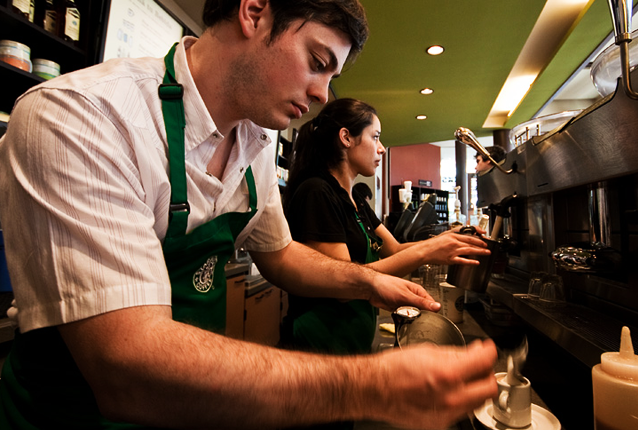 Yesterday, a new bill intended to curb abusive scheduling practices at chain stores, fast food restaurants and banks was introduced to the San Francisco Board of Supervisors.

The Predictable Scheduling and Fair Treatment Ordinance, introduced by Supervisor David Chiu, would require employers at certain chain businesses to post work schedules 14 days in advance and compensate employees for last-minute schedule changes. If enacted, the bill would also require managers to pay a set amount when employees are scheduled to be “on call” but are not called in to work and to provide part-time workers the same access that full-time staff have to requests for time off and schedule changes. The ordinance would apply to any businesses with 11 or more locations and 20 or more employees, covering an estimated 35,000 people, or about five percent of the city’s workforce.

Chiu’s ordinance constitutes the second portion of a groundbreaking package of legislation targeting chain retailers dubbed the “Retail Workers Bill of Rights,” which has been spearheaded by Jobs With Justice San Francisco. The first piece of the legislative package was introduced in July by Supervisor Eric Mar and would require employers at chain stores to offer more hours to part-time workers before hiring new employees and allow workers to keep their jobs for at least 90 days if the company is bought or sold.

In the past year, we’ve heard loud and clear from the community that a higher minimum wage is not enough to survive in San Francisco – people also need access to fair and predictable hours on the job.

Together with the growing movement of workers who are part of our coalition, we are committed to fighting for the strongest worker protection policies to make sure retail employees no longer have to put their lives on hold for last minute schedule changes, canceled shifts and on-call shifts, without certainty about how many hours they will get from week to week. As the second piece of the Retail Workers Bill of Rights, this legislation demonstrates real progress in the fight to confront the sharp economic inequality plaguing too many people in our community.

We commend the leadership of Supervisors Chiu and Mar on this issue, as well as the work of the Predictable Scheduling Task Force, and are eager to work together to ensure that the final measure includes the strongest protections from each of the component bills, and reflects the best possible Retail Workers Bill of Rights. I am proud of the role our coalition has played in this historic effort to make San Francisco the first jurisdiction in the country to create a comprehensive set of policies to address the growing problem of insufficient and unjust schedules in the workplace.”

The legislative package will be voted on by the Board of Supervisors at some point this fall, after San Francisco residents vote on a ballot measure to increase the city’s minimum wage to $15 an hour on November 4. Taken together, both policies could have enormous impact on San Franciscans confronting longstanding obstacles to economic instability in their city.