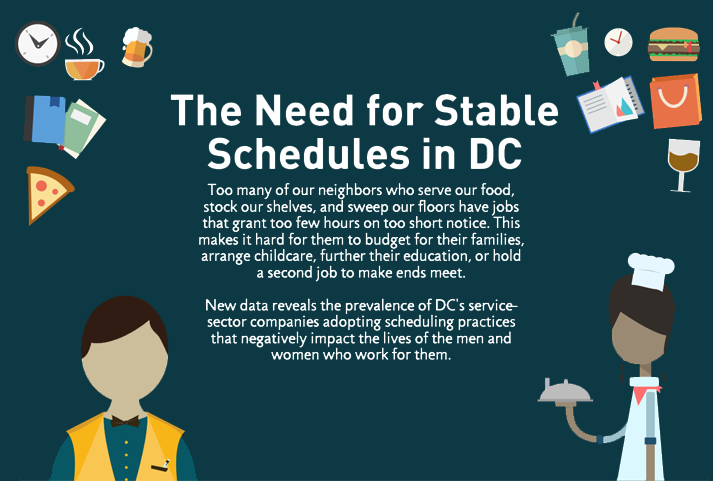 The first-ever study on service sector scheduling practices in Washington, D.C. was released yesterday, with researchers concluding that erratic and unpredictable work hours negatively impact employees and their families. The report was released during a briefing in D.C.’s Wilson Building, with community groups packing the room to hear the results of the report and remarks from the authors, affected workers and City Councilmembers Elissa Silverman and Vincent Orange.

“Unpredictable, Unsustainable: The Impact of Employers’ Scheduling Practices in D.C.,” issued by DC Jobs With Justice, Jobs With Justice Education Fund, DC Fiscal Policy Institute and Georgetown University’s Kalmanovitz Initiative for Labor and the Working Poor, draws on a survey conducted with 436 respondents in 2015, focusing on the retail and restaurant/food service industries.

Consistent with previous research, the authors find that District employees are granted too few hours on too short notice, resulting in unpredictable incomes and work schedules that make it hard for individuals to budget, arrange childcare, continue with education or hold down a second job to try to make ends meet.

“It’s frustrating and it’s stressful to not get hours. The money from 20 hours a week only gets me back and forth to work but nothing more for my family,” said Stephanie Dunn, who was interviewed for the report. Dunn, a part-time cashier at Marshalls has had her hours cut from 25 to 20 to 15 hours a week since joining the staff in October 2013.

So-called “just-in-time” scheduling practices, where employees are asked to come and go depending on how much work there is to do, are highly prevalent in the District. Company policies can force employees to maintain open availability for full-time hours when they are only assigned and compensated for part-time hours. Supervisors commonly send staff home before their shift ends without compensation. High variance in schedules from week to week can make it difficult to arrange childcare, let alone pursue additional employment or education. Other key findings of the report include:

Employees surveyed in the report said they might not request changes to their schedules out of fear, or direct experience of employer retaliation. Former PMI employee Fikirte Atlaw believes she was fired for asking for a different schedule after 25 years of working as a parking attendant for the company. After her husband passed away, she requested starting her job one hour later in the morning so she could manage dropping her son off at school. Atlaw’s experience mirrors results from the survey that found women in the service sector were far more likely to face retaliation when asking for a schedule change than men.

“The women and men who serve our food, stock our shelves and sweep our floors deserve some security in their schedules to lead a good life. Encouraging and enforcing stable work scheduling practices will mark significant progress toward making Washington, D.C. a great place to live, work and sustain a family,” said Executive Director of DC Jobs With Justice Nikki Lewis.

Councilmembers Orange and Silverman expressed support for the report’s recommendations. Silverman described the report as “just the launch” of the campaign for fair and predictable schedules.

Last year, San Francisco became the first jurisdiction in the country to pass scheduling protection legislation, requiring large chain stores to provide employees with notice of schedules two weeks in advance and mandating employees are paid for times when their shifts are canceled with less than 24-hours’ notice. Jobs With Justice San Francisco led the campaign to pass the Retail Workers Bill of Rights, supported by a coalition of workers and community and labor advocates.

The full report and executive summary of “Unpredictable, Unsustainable: The Impact of Employers’ Scheduling Practices in D.C.,” can be accessed at www.dcjwj.org/scheduling-report.