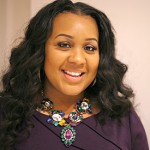 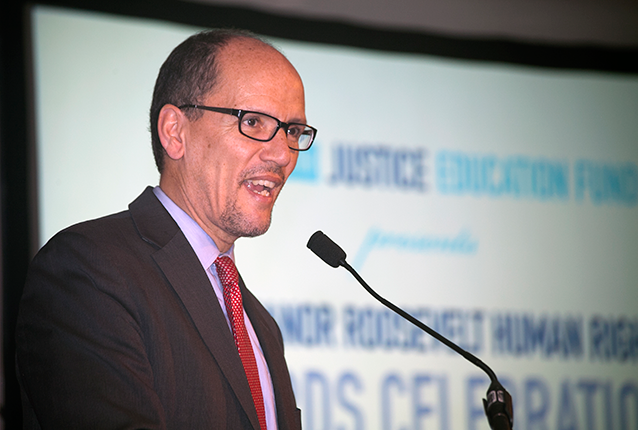 On November 20, for the 10th consecutive year, more than 400 labor leaders, advocates, policymakers and allies from the labor, progressive, social justice and student movements joined Jobs With Justice for our annual Eleanor Roosevelt Human Rights Awards Celebration. Book-ended by major victories for working people, this celebration was definitely one to remember.

Early on, a vibrant energy filled the room as attendees mixed and mingled with the 2014 recipients of the Eleanor Roosevelt Human Rights Awards. After a welcome from our event emcees – Jobs With Justice Executive Director Sarita Gupta and Columbia University professor and Roosevelt Institute fellow Dorian Warren – surprise special guest United States Secretary of Labor Thomas Perez thrilled the crowd with an energizing speech. Secretary Perez recognized the role Jobs With Justice and this year’s honorees have played in fighting for working people, adding, “When workers have voice, America succeeds.”

George Cohen, former director of FMCS, accepted the evening’s first award, which recognized his extraordinary legal career that advanced the practice of collective bargaining from the football field to the factory floor. In his acceptance speech, George kept everyone laughing while reminding us how our collective efforts today build upon the hard work of those, like Eleanor Roosevelt, who came before us.

President Randi Weingarten and the American Federation of Teachers were presented with the second award for their commitment to quality public education and finding sensible solutions to the student debt crisis. Throughout her speech, we could feel President Weingarten’s passion for lessening the achievement gap that plagues our public schools and combating the influence of corporations like Sallie Mae on our education system.

UAW leader Sylvia Johnson accepted the final award of the evening on behalf of the workers of the Chattanooga, Tennessee, Volkswagen plant. In a videotaped message that brought the room to its feet, local UAW leaders Steve Cochran and Devin Gore shared how through hard work, their strong members prevailed in organizing a first-of-its-kind workers council despite unprecedented right-wing opposition – and how they won’t back down no matter what comes next.

Finally, Jobs With Justice Board Chair Esther Lopez of the UFCW pitched a call to action to raise additional financial resources for the organization to continue to win real change for working families. In her heart-filled speech, Esther tied Jobs With Justice’s decades of work on immigration reform to President Obama’s anticipated executive action announcement.

We would like to thank everyone that participated in our 10th annual Awards Celebration. We look forward to our continued partnerships in 2015 and beyond. Check out more about the sponsors who made this evening possible and photos from the night’s event.