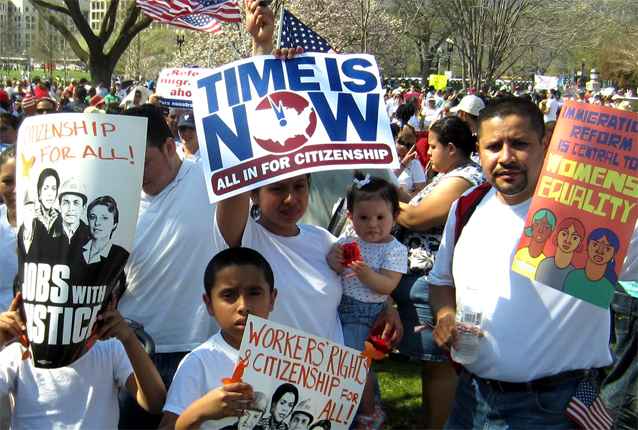 Yesterday, after a year of inaction and obstruction by House Republicans, President Obama vowed that he will begin to fix the broken immigration system through his Constitutional authority to take executive actions. He pledged to begin doing so later this summer. With this announcement comes an opportunity for the president to use his full powers to protect workers’ rights.

It’s been a year since Senate Democrats and Republicans passed S.744, a bipartisan immigration reform bill promising an earned pathway to citizenship for millions of immigrants in our communities and stronger labor protections for all workers. As that bill and other comprehensive fixes to our broken immigration system have languished in the House of Representatives, the weight of inaction has been severe. The president himself noted that there have been significant consequences for workers because House Republicans have prevented a real solution from moving forward:

“It’s meant more businesses free to game the system by hiring undocumented workers, which punishes businesses that play by the rules and drives down wages for hardworking Americans.”

President Obama is correct – our broken immigration system allows employers to undermine labor standards and evade workplace laws. That’s because low-road employers know that they can use immigration enforcement to threaten and retaliate against immigrant workers who try to exert their rights under federal labor and employment laws. Employers who misuse our immigration laws hurt all of us – they drag down wages and job standards for all workers, no matter where they were born.

A broad and growing number of advocates have been calling on the president to use his executive powers to curb the deportation crisis hurting too many immigrant workers, families and communities while House Republicans have stalled immigration reform legislation. The president’s announcement shows that he is listening, but in order to help immigrant and nonimmigrant workers alike, he must undertake bold and decisive actions that help all of those that would have qualified for relief under S. 744. And he must take this opportunity to refocus the Department of Homeland Security (DHS) enforcement policies and procedures to help end the agency’s role as a de-facto, taxpayer-funded unionbusting service for employers who not only deny workers their labor rights, but then try to evade responsibility when they are caught breaking the law. As the president considers what actions he can take, those who care about expanding the rights and opportunities for workers cannot sit on the sidelines. We must continue to raise attention to the need for real relief and stronger protections for all workers. That should come in the near term through broad executive action, but ultimately John Boehner and House Republicans have a responsibility to allow a vote on legislation providing a permanent, comprehensive solution.