Department of Education Laughs Off Questions From Congress 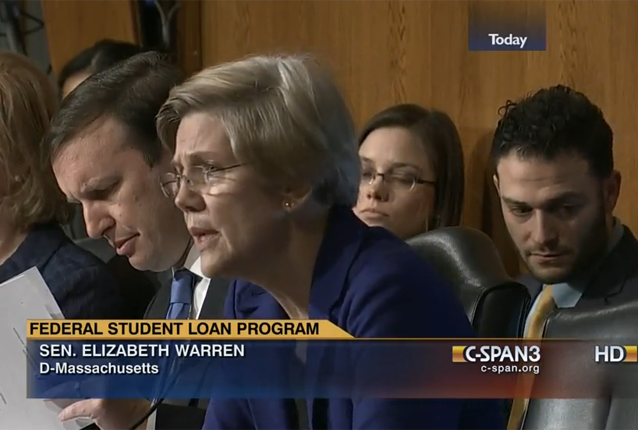 The Department of Education’s federal student loan program has come under growing scrutiny in the past month, particularly in Congress. Recently, the chief operating officer of the Federal Student Aid Office, James Runcie, was called to testify before both the Senate and House committees that focus on higher education where he faced questions about his department’s oversight of the private banks that service federal student loans and his department’s growing profit off of student debt. Both hearings were part of a series to investigate the department’s federal student loan programs as part of the upcoming reauthorization of the Higher Education Act. Several of the banks that service federal student debt, including Sallie Mae and NelNet, were invited to testify but declined.

Much of the questioning focused on the Department of Education’s seeming reluctance to discipline student loan servicers and debt collectors that are in breach of their contracts (Sallie Mae, for example), and the failure of the Department of Education as a whole to help struggling student borrowers. As evidence, Senator Tom Harkin (D-Iowa) pointed out that the department effectively pays its debt collectors more than $1 billion per year for as little as “writing one letter” to a struggling borrower.

A large portion of the Senate HELP committee hearing was spent discussing the Department of Education’s profits made off student debt, a reported $41.3 billion in 2013. Senator Elizabeth Warren (D-Mass.) noted that for the government to “break even” on student loans, they’d only need to charge an interest rate of about two and a half percent, yet currently, interest rates on federal student loans are set to be twice that for undergraduates and up to triple that for graduate students. When asked if the profits from these loans went back toward helping struggling borrowers or investing further in grants for students, Runcie admitted that, “They do not – they’re used to fund the government generally, they do not come back specifically into the program [for students].” (Watch here!)

In response, Senator Warren said simply, “I think this is obscene, we are taxing students for the privilege of borrowing money.” We couldn’t agree more.

Runcie’s obfuscation of the department’s role in the student debt crisis was also on display during the House hearing. When asked if the department is holding student loan servicers and debt collectors accountable to the rules of the Fair Debt Collection Practices Act (which prohibits debt collectors from providing false or misleading information), Runcie laughed and responded: “I assume so.” (Watch from 49:25 to 49:52.)

The thing is, we don’t think our government making banks that they have contracts with follow the law is really that funny. A recent Government Accountability Office report found that in at least one instance a collection agency provided false information to a borrower by indicating that a down payment or debit card was required to rehabilitate a loan. Of course, Runcie did not address this after sharing a brief chuckle at the question.

Later in the hearing, when pressed about the department’s likely renewal of  contracts with its four primary student loan servicers, (Sallie Mae, Great Lakes, NelNet and FedLoan Servicing – all of which the Department pays handsomely), Runcie once again found himself defending the bad practices of the banks. Here’s how it went down:

Senator Warren asked why the department planned to renew its contract with Sallie Mae, which made more than $100 million in profits from this contract between 2007 and 2011, citing that the publicly traded corporation is under investigation by the Federal Deposit Insurance Corporation (FDIC), the Department of Justice and the Consumer Financial Protection Bureau (CFPB) for dozens of contract and rule violations, including misreporting loan balances to students and failing to remove students from default status even after their loans were rehabilitated. Runcie actually admitted that the Department could do more – like add stricter language to Sallie Mae’s existing contract – but he said it would be difficult to move the existing student loans to a new servicer. In response, Senator Warren quickly noted: “We know that there are problems with Sallie Mae, it has become public, and the actions you are taking and the oversight you are exercising has obviously not been enough to correct the problem. And I’m concerned about re-upping a multimillion dollar contract with Sallie Mae, when Sallie Mae has demonstrated time and time again that it’s not following the rules.”

Senator Harkin noted: “I just might add that it sounds like your answer Mr. Runcie is that they’re too big too fail.”

The larger question, ultimately, and the one that didn’t come up during the hearings is this: Why is the Department of Education (led by Secretary Arne Duncan, James Runcie and the rest of their gang) making billions of dollars in profits and going out of its way to protect its big bank friends while doing very little to actually help and protect borrowers? When government agencies act like corporations, it’s time for something to change.

1 Comment on “Department of Education Laughs Off Questions From Congress”