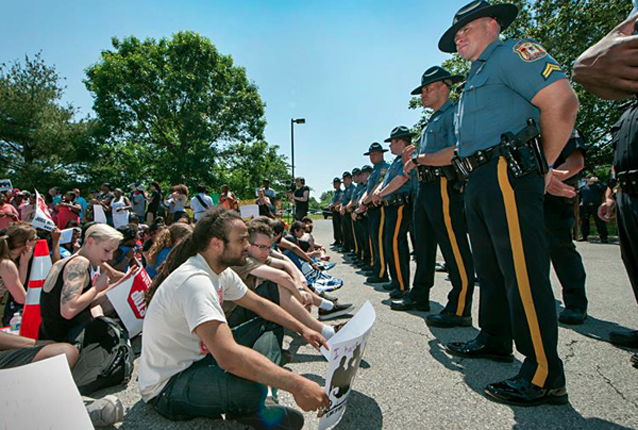 SLAP members protest at the headquarters of Sallie Mae, corporate owners of a large percentage of student debt.

Sallie Mae has finally agreed to sit down with the Student Labor Action Project (SLAP) and US Student Association (USSA) to discuss how to make affordability for all students and graduates a reality.

Last week, more than 200 students, teachers, and community members gathered at Sallie Mae’s shareholder meeting demanding their executives meet with students, and increase transparency on how the bank spends money on lobbying and political donations. The overwhelming police presence did not deter the group – as we peacefully protested and spoke out in front of journalists and news cameras to make our demand for a meeting we’ve been asking for since February 2011. After years of organizing, fighting, facing arrests and demanding Sallie Mae executives meet with us, we finally won a meeting with its new CEO Jack Remondi!

Make no mistake, there is much still to do to hold Sallie Mae accountable for its role in the student debt crisis. At the shareholders meeting, President Randi Weingarten of the American Federation of Teachers, Jobs with Justice/American Rights at Work Executive Director Sarita Gupta and 22 students with shareholder proxies presented a resolution for full transparency from the publicly traded corporation The resolution specifically asked for increased disclosure of lobbying at the state and federal level, and increased transparency about Sallie Mae’s membership with the American Legislative Exchange Council (ALEC).  The resolution also questioned the company’s  executive bonus structure, which has allowed the top five executives to make millions of dollars while student debt has surpassed $1 trillion and  students continue to default on their loans at an alarming rate.  The shareholder resolution received an impressive 30 percent support.

While the meeting is a great sign of progress, students need to keep the pressure on Sallie Mae to make education more affordable and accessible. USSA, SLAP, Jobs with Justice and other coalition partners will keep standing on the front lines and fighting for education as a right for everyone.