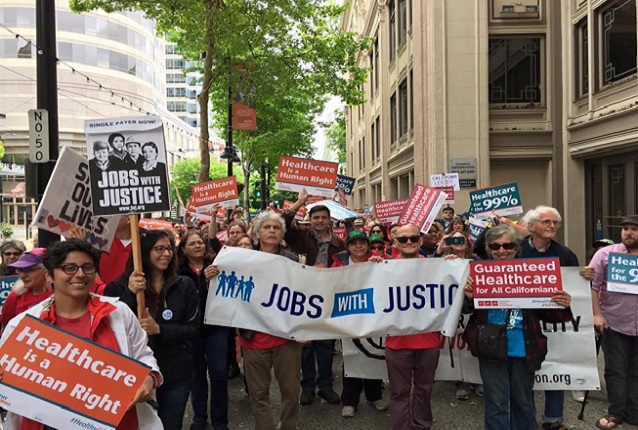 Ever since FDR passed 15 major pieces of New Deal legislation during his first 100 days in office, presidents have been measured by their effectiveness within the same time frame. President Trump thought the benchmark so important that he signed a “contract” saying what he would accomplish during those hundred days.

Trump promised to get many things done, especially for the benefit of profitable corporate elites at the expense of the rest of us. Even before he pushed out his contract, working men and women, and their allies across the country have banded together to stand up to Trump’s extreme proposals.

The first fight started when Trump selected CKE Restaurants CEO Andrew Puzder to be his Secretary of Labor in December 2016. The now-former head of the Hardee’s and Carl Jr.’s chains spent most of his career undermining the people who work for him, humiliating women, and fighting against fair wages, family sustaining jobs. Working people, fast-food and restaurant workers, women’s rights organizations, civil rights advocates, labor rights groups campaigned to oppose, and ultimately defeat, Puzder.

Our campaign demonstrated the power of our movements in pushing back against this administration’s dangerous agenda. Even Andrew Puzder, the only Trump cabinet secretary nominee to withdraw, credited “the Left” for his loss.

This defeat had ripple effects. It took Trump until his 98th day in office to appoint a Secretary of Labor. As newly-confirmed Labor Secretary R. Alexander Acosta heads to that cabinet seat, workers’ rights activists who opposed his confirmation have put him on notice. We will be watching him to make it clear that when he has to choose between protecting working people and implementing the Trump agenda, it is his duty to protect working people.

Trump hasn’t turned his attention to appointing a Deputy Secretary of Labor, new members of the National Labor Relations Board, or other key officials who could make workplaces worse once in office. Trump has only made one nomination to the lower courts despite more than 100 vacancies. By not filling out these posts, Despite Trump’s pre-election promise to overturn Obama-era regulations that hold corporations accountable for creating safe, sustainable, and family-supporting workplaces, many still remain on the books.

We also won another big victory against the Trump administration by forcing congressional Republicans to withdraw the corporate American Health Care Act. The GOP’s boardroom bailout plan would have decimated Medicare, repealed much of the Affordable Care Act, and stripped insurance coverage from nearly 30 million Americans.

A deluge of protests erupted in response. And even when legislators hid in the shadows instead of listening to their constituents, community groups organized town hall meetings in their place, providing a platform so working people could make their voices loud and clear in opposition to this destructive bill. As a result, Trump broke one of his major promises for his first 100 days: that he would repeal and replace the Affordable Care Act.

That is not to say that there haven’t been setbacks. Most strikingly, Trump appointed Justice Neil Gorsuch to the Supreme Court despite Gorsuch’s clear pro-corporate agenda. Working people fought hard against Gorsuch, and Trump and his Senate allies had to break constitutional norms and Senate rules to get his nominee on the Court.

Furthermore, the delays caused by stopping Puzder and resisting the rest of the Trump agenda have been a double-edged sword. The administration passively unravels rules on the books by not enforcing them. For instance, the Trump administration has not withdrawn the overtime rule, which, if implemented, would give a raise to millions of Americans. But the administration hasn’t decided whether to continue to defend the overtime rule, which a federal judge put on hold after corporations sought to tie up the rule in the courts.

Similarly, Trump has yet to withdraw a rule requiring Wall Street investment professionals to put the welfare of retirement savers ahead of their sales commissions. But the Labor Department just delayed its implementation, while industry lobbyists seek to eliminate it altogether. The Trump administration also delayed the date in which companies have to comply with limiting the exposure of working people to cancer-causing silica dust The AFL-CIO estimates that 160 people could die as a result of the delay.

Overall, working people withstood the period when a president is at his or her most powerful. There is still a long way to go in the president’s term, and Trump will get his share of wins. However, even with politicians beholden to corporate CEOs controlling the White House and both houses of Congress, working families have stood together and stopped critical parts of the Trump agenda.