Why It’s Time for Just Hours and Stable Schedules 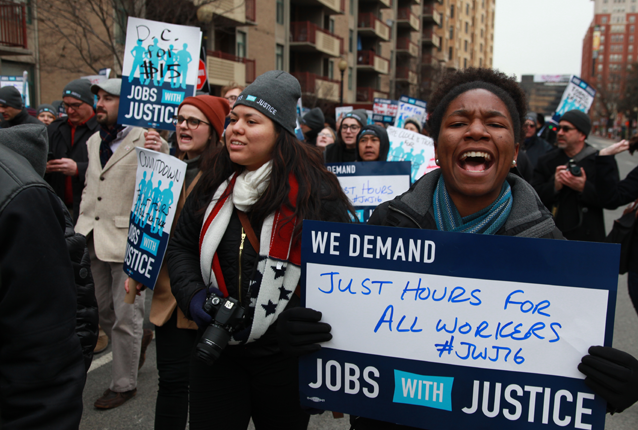 UPDATE on 4/13/16: Attorneys general in seven states and the District of Columbia have announced they have joined forces with the New York Attorney General’s office to look into complaints involving retailers who insist on their employees keeping their schedules open and lives on hold for shifts they may never be assigned to or paid for. This investigation into the use of on-call schedules by 15 major retail outlets like Aéropostale, American Eagle Outfitters, Coach, the Disney Store, Forever 21, Payless and Vans will bring even more attention to how erratic schedules and unreliable hours negatively impact the lives of working people.

An overwhelming majority of Americans support the creation of rules that allow people to have greater certainty about their work schedules, so they can spend time with their families while earning enough to support them. That’s according to national polls, surveys of Washington, D.C. residents and business leaders themselves.

Exposes by the media, detailed reports, protests by working people and an expanding investigation by the New York Attorney General’s office have contributed to the growing outrage over companies that assign unpredictable schedules and unsustainable hours.

The attorney general’s pursuit of companies’ use of on-call schedules, along with consumer pressure, has quickly led to a number of retailers vowing to end the abusive practice, which requires women and men to plan their lives around the mere possibility of having to work.

While the overtures from retailers, whether due to legal or public pressure, are a step in the right direction, new enforceable standards are needed to ensure that working people gain predictable schedules and better hours.

Working men and women and community activists aren’t waiting for companies to set the schedule of when they will improve their scheduling practices. In San Francisco, community leaders, labor advocates and people who work for large-chain retailers came together and enacted the first set of comprehensive and meaningful standards that would address this issue.

The victory in San Francisco has inspired similar efforts in Washington, D.C., Massachusetts, Seattle, Connecticut, Minnesota and San Jose. On the national level, the Schedules That Work Act would ensure that everyone has the right to request a predictable schedule. By coming together, we can change the rules so that people will have sufficient notice of when they will work and for how long they’ll work.

Take a look below at the current snapshot of scheduling fixes either pledged or already underway by large corporations. The changes these companies are already making demonstrate businesses have the means to implement real scheduling improvements.