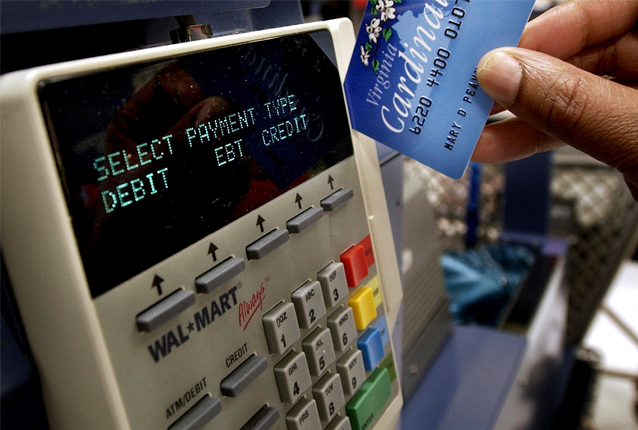 Walmart, the nation’s most profitable corporation, may also be the greatest beneficiary of the taxpayer-funded Supplemental Nutrition Assistance Program (SNAP), commonly referred to as food stamps.

But how has Walmart managed to make so much money off of taxpayers? For the short answer, take a look at the chart below where we’ve illustrated the scam. For the long answer, keep reading. Step One: Pay your employees so little that they are forced to rely on food stamps to survive.

Even at Walmart’s definition of a full-time job, an employee earning the company’s average wage of $8.81/hour makes just $15,500 per year, placing them well below the federal poverty line for a family of four. With such low wages, even when working full-time hours, many associates are forced to depend on taxpayer-funded assistance such as food stamps and Medicaid to survive. In other words, Walmart is shifting responsibility onto the public for ensuring their associates’ basic needs are met. One study showed that a single Walmart can cost taxpayers anywhere from $904,542 to nearly $1.75 million per year, or about $5,815 per employee for these programs all because one of the world’s most profitable retailers is paying substandard wages and benefits. A more recent report by Americans for Tax Fairness revealed that Walmart’s reliance on programs like food stamps cost federal taxpayers an estimated $6.2 billion a year.

While taxpayers are shouldering the responsibility to ensure Walmart’s employees can make ends meet, the company zealously avoids contributing its fair share of taxes using a myriad of schemes. Another report by Americans for Tax Fairness and the Institute for Policy Studies claims the company exploits a little-known loophole to avoid an estimated $104 million in U.S. taxes by granting extravagant “performance pay” bonuses to top executives. You read that right – the more Walmart pays its executives, the less it pays in taxes.

The Waltons, the nation’s wealthiest family and owners of Walmart, contribute almost none of their personal wealth to the charitable foundation that bears their name and instead uses the charity’s tax structure to avoid an estimated $3 billion per year in estate taxes.

By fervently minimizing its tax liability, Walmart has once again dodged its responsibility in addressing its employees’ basic needs and is instead letting the rest of us foot the bill.

Step Three: Reap billions in profits when food stamps are spent in your stores.

So what happens to all those food stamp dollars? They’re spent at Walmart!

Last year alone, Walmart collected an estimated $13 billion in revenue from food stamps spent in their stores. As Slate and NPR reported in April,

“The same company that brings in the most food stamp dollars in revenue – an estimated $13 billion last year – also likely has the most employees using food stamps.”

There you have it. Walmart’s perfected its food stamp scheme by keeping its employees dependent on taxpayer-funded food stamps, not paying its fair share in taxes to  fund SNAP, and then reaping all the profits from food stamp redemption in its stores.

For a company that can easily afford to pay its employees decent wages, Walmart has decided to do just the opposite. Just last week, the company’s spokesman, David Tovar, published a snarky retort in response to a recent New York Times opinion column denouncing the company’s refusal to meet its employees’ most basic needs. As the Huffington Post revealed, Tovar’s “fact check” was short on actual facts, but it did illustrate another of Walmart’s usual strategies: when problems are exposed within your ranks, unleash a well-funded PR machine instead of addressing the issue.