Though It Dictates Demand, Walmart Ignores Workers in Its Supply Chain 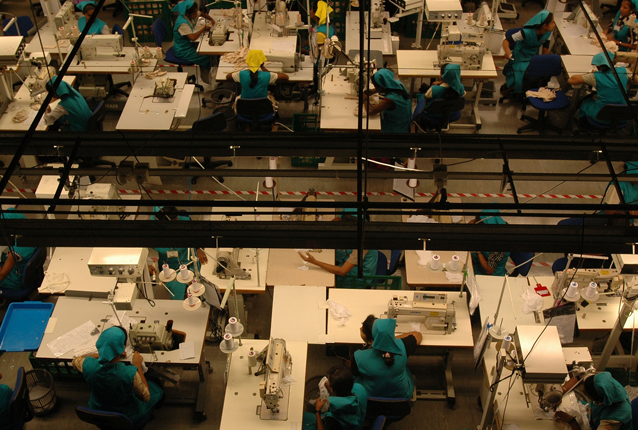 Via ILO in Asia and the Pacific

Walmart is not only the world’s largest retailer and private employer; it’s also the overseer of one of the largest supply chains in the world. Walmart exerts enormous pressure on its suppliers and even has million-plus square foot warehouses just for its own products. Even though Walmart exerts an enormous amount of power over this supply chain, the company takes a hands-off approach when it comes to enforcing workers’ rights—rights verbalized in its own ‘standards for suppliers.’

Walmart’s lack of accountability to the people who make and move goods for the chain has attracted sizable attention in recent years. In 2013, the worst garment industry catastrophe in history occurred when the Rana Plaza building in Bangladesh collapsed. At this factory that manufactured garments for Walmart, at least 1,138 people were killed and more than 2,500 were injured. And yet Walmart has refused to sign onto substantive safety and labor accords, which more than 150 companies have signed onto, that would prevent such tragedies from happening again.

As there are still conditions throughout the company’s garment supply chain that put millions of people at risk, Jobs With Justice has partnered with the Asia Floor Wage Alliance and others to investigate further. From our research, we’ve produced a report documenting serious labor violations and abuse of workers by Walmart’s garment suppliers in India, Cambodia and Indonesia.

Our report found numerous instances of rampant wage theft, violations of workers’ internationally recognized rights to create and join unions and chronic gender and sexual harassment from factory managers throughout the garment sector in all three countries. In line with new research from the Food Chain Workers’ Alliance, we found Walmart does little to nothing to ensure workers’ rights are respected within its own garment supply chain.

The report provides several recommendations for Walmart to take to ensure workers’ and human rights are enforced and respected in its supply chain, including:

This report provides a detailed look at what happens when a major corporate actor shirks its responsibility to maintain basic labor and human rights standards. As the world’s largest retailer, and thus as the trendsetter for the production of all manner of products, Walmart has an obligation to ensure dignity for the people who create its products.

Representatives from the United States and Asia who contributed to the report will present on some of their findings Thursday, June 25, 2015 in New York, NY. For more information, click here.