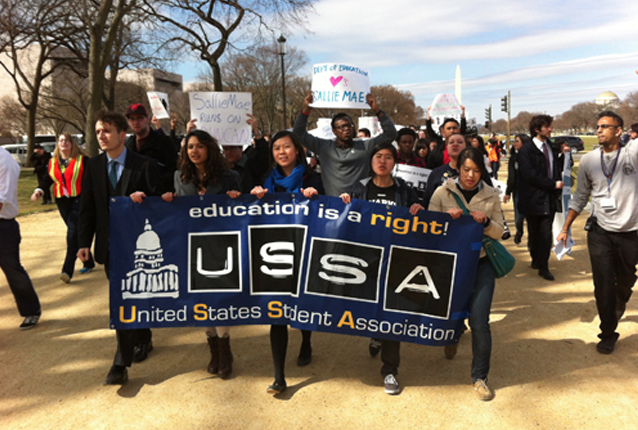 After nearly 200 students protested outside the headquarters of the U.S. Department of Education (DOE), Secretary of Education Arne Duncan agreed to meet with students to talk about the student debt crisis.

Sec. Duncan’s agreement to meet represents a positive step forward for students to have a seat at the table with the DOE to address the nation’s growing student debt problem.

Ian Reese, a student from the University of Wisconsin, said “We want the Department to stand with students, not corporations like Sallie Mae, whose predatory loan practices are saddling people with debt from cradle to the grave.”

The students held a similar rally last year outside Sallie Mae’s offices, and 36 students were arrested. At last week’s rally, students were initially locked out of the DOE building, and police officers guarded the entrances. Since they weren’t allowed inside, the students quietly sat in front of the doors. Two DOE staff members came outside to accept the letters from the students.

After every student personally delivered their hand-signed letters, several student leaders spoke to the crowd about the importance of higher education and the need to work with policymakers to solve the student debt crisis.

Navkiran Kaur, a sophomore at University of California, Santa Barbara who already has over $20,000 in student debt was one of the speakers. Kaur explained that while private lenders continue to profit off the student debt crisis, millions of students are defaulting on their loans.

After student leaders finished their speeches, DOE staff told the crowd they would continue working together, and promised to personally deliver the letters to the Secretary and schedule a meeting in the next month.