These Whistleblowers Are Standing Up to Retaliation and Deportation Threats 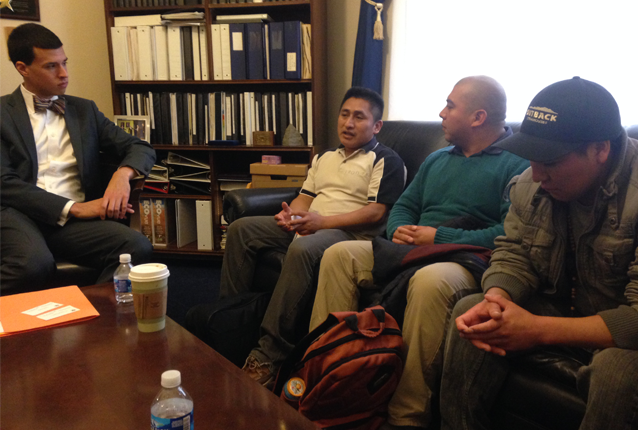 Teriyaki House employees, along with JWJ Senior Policy Analyst Michael Wasser, tell their story on Capitol Hill and present the case for the POWER act.

Vicente, Pedro and their co-workers at Teriyaki House in Providence, Rhode Island, worked grueling shifts, often spending more than 72 hours per week in the restaurant’s kitchen. They say their boss only permitted them to take a single 15-minute meal break each day. And when payday rolled around, forget overtime, these guys weren’t even paid the minimum wage.

Teriyaki House’s owner is likely no different than a host of businesses that underpay their employees, deny them rights and violate employment and labor laws in the process. Underhanded businesses can often take advantage of immigrants they employ because of our broken immigration system. That’s because skirting the law and abusing immigrants with pay below the minimum wage, dangerous working conditions, and other abusive behavior appears quite feasible to low-road employers when immigration enforcement can be turned into a threat, making employees feel too scared or vulnerable to assert their rights and report wrongdoing. But Vicente, Pedro, and their co-workers didn’t stay quiet.

They recently filed a complaint with the U.S. Department of Labor over what appears to be significant minimum wage and overtime violations by Teriyaki House, supported by Rhode Island Jobs With Justice and Fuerza Laboral, a local workers’ center. Unfortunately, the employees say their boss responded by becoming physically aggressive around them at work and threatening them with deportation.

It’s a story that’s all too familiar for many immigrants who have blown the whistle on bad businesses. Which is why Vicente and Pedro traveled from Providence to Washington, D.C., last week to share with Congressional staff the double whammy of abuse on the job and then threats and retaliation for reporting their employer’s wrongdoing.

To provide critical whistleblower protections for some of the country’s most vulnerable workers, and help to ensure that law enforcement agencies can fully investigate complaints of workplace wrongdoing, Rep. Judy Chu (D-Calif.) reintroduced the POWER (Protecting Our Workers from Exploitation and Retaliation) Act in the U.S. House of Representatives yesterday.

Fixing our broken immigration system still requires a comprehensive solution, but by passing the POWER Act, Congress can help ensure immigration enforcement isn’t used by low-road employers to deny employees their rights under labor and employment laws. If we stop allowing egregious employers from getting away with unfair, inhumane and illegal behavior against immigrants, then not only will employers who play by the rules benefit, but so will all working Americans whose employment standards are being dragged down with the status quo.