The Women Who Inspire Us, Verizon? The Moms and Daughters on the Picket Line 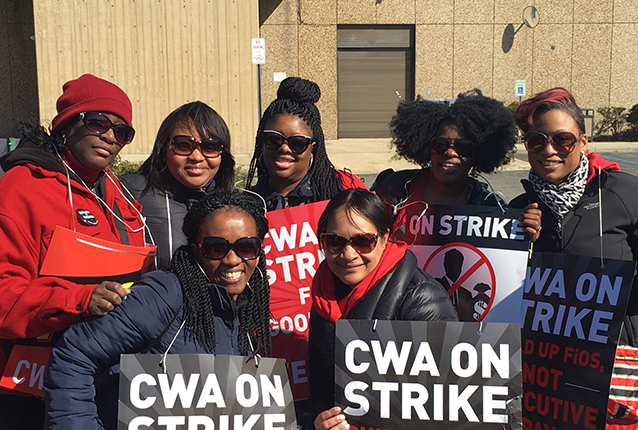 Verizon has long been out of touch with the needs of the people who make the telecommunications giant so insanely profitable. More than 39,000 men and women who work for the company are on strike right now because Verizon refuses to negotiate a contract that respects them and their families. And now, as they risk their livelihoods without paychecks and health insurance, the corporation is showing again just how separated from reality it is.

To whit: In honor of Mother’s Day, Verizon’s PR office tweeted this:

For the next week, we'll be showcasing mothers, mentors & leaders of change at Verizon and in the tech world. Follow using #WomenWhoInspire.

This symbolic gesture celebrating the women who make the company so successful on Twitter rings hollow to the mothers and daughters who work at Verizon, when their requests for a stable job that allows that them to see their families at the end of the day have been ignored for months.

These are women like Betsy Derr, who is a customer service representative at Verizon in Bloomsburg, PA. She’s been with Verizon for more than 16 years and is a married mom of two boys, who are 11 and 15. Verizon has plans to close Betsy’s call center and have her relocate more than 75 miles away, meaning she’ll have to leave for work before her kids wake up and only have an hour or so with them after work. Betsy would spend another three hours every day in the car commuting. That means time away from her boys, and more swim meets and school events she’ll be forced to miss.

Betsy and her husband are already careful about their money, but now that she and her co-workers are on strike, things are even tougher for her family.

“But we know we have to take a stand,” Betsy said. “We work hard, we do a good job for this company and this company is very profitable. In return, we want to have a decent standard of living. We want to enjoy our off-time and spend it with our families. That shouldn’t be too hard for Verizon to understand.”

Jenny Whitlow, who calls Virginia her home, is also on strike. Verizon is requiring Jenny to travel up to six months out of the year and is routinely sent to work two to three hours away from home, even though she said she couldn’t travel when she interviewed for the job.

Jenny has a 15-year-old son, and she’s missed lots of his ball games, school projects and other milestones while she’s been away for up to two weeks at a time. Jenny says it’s been unsustainable to be away from her son and her husband: “You’re doing this to give your family insurance and support, but as a mother, there’s such a feeling of guilt.”

One day Jenny’s mom was hospitalized while she was stationed three hours away at work. She got to the hospital but not before her mother was put on a device that prevented her from speaking. Jenny said she never got to have a final conversation with her mother, who died three weeks later.

Jazmin Sypher, a solutions specialist at a Verizon Wireless store in Brooklyn, went to work at Verizon because she wanted a steady job at a solid company. But Verizon has made it tough for moms like Jazmin to provide a secure life for their families.

Jazmin is in the business of finding solutions to problems, so when she and her co-workers were having problems at their store with low pay and shoddy benefits, they came together in union in 2014. Even as Verizon’s CEO Lowell McAdam takes home $18 million a year – more than 300 times what Verizon Wireless employees like Jazmin make – the company refuses to negotiate a contract with them. Jazmin isn’t asking for $18 million a year, she just wants to be able to provide for her three kids.

Rosita Harrington is a customer service sales consultant in Binghamton, N.Y., who was worked for Verizon for seven years. She says, “When I’m at work, I work hard, and I do my job well. In Binghamton, we take pride in the work we do and love our customers. It’s wrong for Verizon to try and send out job overseas or force us into impossible situations with our families. I just wish they would take the time to see who these decisions are affecting.”

Rosita’s colleague April Carlson, who has been with Verizon for 19 years, adds, “Leaving at 6:30 a.m. and coming home after 8 at night is no kind of life. When would I see my kids? This is a small community. There aren’t jobs here, so it’s not like we can just quite and find a new job. Verizon is trying to take all of this away from us.”

There’s thousands more women with stories like these. Moms who are giving up a paycheck right now to take a stand with other women so that their kids will have a better future. Women like Dorothy Monsanto, Leah Skeeters and Linda Gemmill who are doing something that’s nothing shy of heroic.

So if you’re inspired by the brave mothers and daughters on the picket line at Verizon, this Mother’s Day weekend tell the company why – and be sure to use the #WomenWhoInspire hashtag!