The Real Math on Raising the Minimum Wage 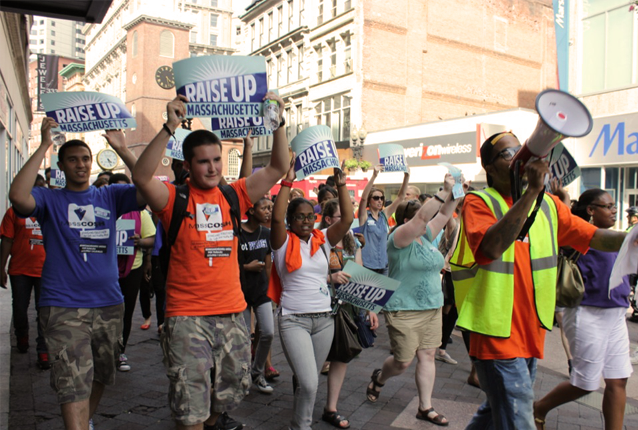 As corporate profits continue to soar, workers’ wages continue to stagnate, creating the widest income inequality gap our country has seen in modern times. So it comes as no surprise that 80 percent of Americans support proposals to raise the minimum wage to $10.10. It should also come as no surprise that large corporations who favor the status quo are lobbying in full force against local, state, and federal wage hike initiatives.

Yesterday, The New York Times put a spotlight on the fuzzy math used by some of the loudest, corporate-funded opponents of minimum wage hikes. In the expose, the pretend-think tank Employment Policies Institute was called out for funding research using selective data in an attempt to claim that raising the minimum wage decreases job growth.

Despite this fuzzy math, The Times’ own editorial board confirmed that the economic evidence shows a higher minimum wage does not cost jobs, writing that “Decades of research, facts and evidence show that increasing the minimum wage is vital to the economic security of tens of millions of Americans, and would be good for the weak economy.”

Here are the numbers that corporations, politicians and their PR machines want to avoid having a conversation about: Working full-time in a minimum wage job pays just $15,000 a year. In other words, today’s minimum wage is a poverty wage.

We challenge the groups opposed to fair wages to try and live on today’s minimum wage and effectively make ends meet. There’s even a handy, new, interactive calculator online that can help users determine if they could survive on bare minimum earnings. There’s really no need for corporations to hire an accountant to do the math for them…though they may still want to retain their lobbyists for advice on how to spin their answers.

The calculator makes clear what people being paid $7.25 an hour already know – that it has become increasingly difficult to put food on the table or pay rent, let alone pay for college or buy a home. When workers can’t afford basic necessities, it lowers their purchasing power and forces them to rely on public assistance, which creates a negative ripple-effect across the entire economy.

In addition to holding corporations accountable, another important step toward regaining our country’s shared prosperity is to insist that lawmakers adopt a meaningful increase in the minimum wage. Congress can begin improving the economic well-being of all Americans by enacting the Fair Minimum Wage Act, which would raise the federal minimum wage to $10.10 per hour. The bill would also increase the tipped minimum wage from a paltry $2.13 to 70% of the regular minimum wage, and, most importantly, would give the law teeth by indexing the wage hike to inflation. Fixing our economy requires support from businesses and legislators alike.
We’ve done the math, and realize than an increase to $10.10 isn’t really enough to address the staggering inequality our country is facing – but it’s a start. We also must demand much more in order to counter the decades of corporate-backed policies that have driven down labor standards, burdened taxpayers, and put profits before people. Raising the minimum wage will boost bottom lines for nearly 30 million workers, which is a real start to reclaiming our economy.

3 Comments on “The Real Math on Raising the Minimum Wage”