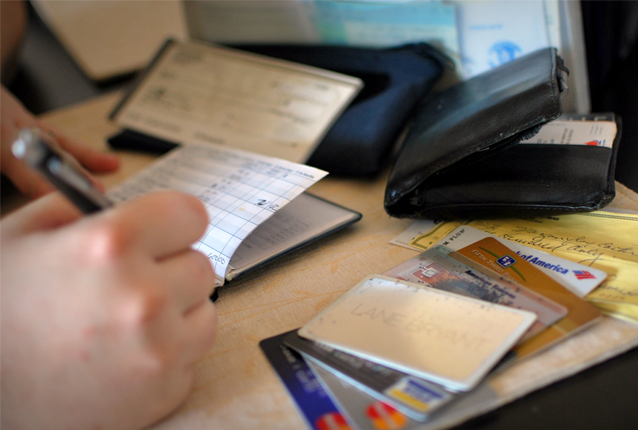 Update (10/30/2015): This week, the Obama administration finalized rules that ban fees on debit cards given to students as part of their federal financial aid. These new standards, which go into effect next July, will eliminate charges for overdrafts and other fees, and require card companies to make sure that students can withdraw their funds free of charges like ATM fees. While the fees might seem like chump change to some, the new rules would eliminate up to $500 worth of fees each year that students can instead use on everyday expenses like groceries, books and rent. Issued by the Department of Education, the rules will additionally require more transparency for the agreements between colleges and the financial companies, and prevent automatic enrollment in the companies’ products. Thanks to the efforts of students involved with the Student Labor Action Project and the U.S. Student Association, the stories of students being taken advantage of by these predatory financial firms are about to become history.

Last week the Department of Education released draft rules to eliminate the fees imposed on debit cards that are dispersed to students who are granted financial aid to pay for expenses such as books, rent, and groceries. Students across the country who have been organizing against the abuses of the campus banking market have trumped the financial industries’ moneyed attempts to stop these critical new protections.

Currently, banks and financial firms partner with colleges and universities to disburse the remaining balance on students’ financial aid after tuition is taken out. Banks and financial firms pay out this balance through debit and pre-paid cards, which students are coerced into using in order to receive their financial aid. The problem lies in how these banks charge exorbitant fees such as inactivity fees, point-of-sale fees that charge up to $0.50 per transaction and high overdraft fees. Some students face up to $500 in fees per year. As troubling are the unusual fees that the banks assess on the cards that are mandated to students to use, including fees for inactivity.

Charging high fees netted Higher One, the financial firm with majority share in the campus banking market, $12.1 million in profit in 2012. The firm recently settled a class action lawsuit for predatory marketing practices for $15 million. Since 2012, Higher One has spent $1.2 million on lobbying to stop these regulations from taking effect. Industry lobbyists, such as Richard Hunt of the Consumer Bankers Association, have spoken about the need to defend fees and preserve the opacity of agreements between banks and universities.

For over a year, students involved with the Student Labor Action Project and the U.S. Student Association have been sharing their negative experiences with third-party financial firms. Mayra Guizar, a first-generation college student at Western Washington University, said that she was surprised that her university would partner with a financial firm that charged her $0.50 each time she made a purchase. After unsuccessfully trying to close her Higher One account and then transferring her financial aid to her personal bank account, she found that she owed $200 due to inactivity fees and had to pay off the balance to avoid overdraft fees.

Stories like Mayra’s are not isolated. Nine million individuals receive grants and loans dispersed by banks and firms like Higher One annually.

In addition to eliminating fees, the draft regulation requires all agreements between financial firms and higher education institutions to be made public. In spring 2014, students on more than a dozen campuses requested agreements between their colleges and financial firms. Only one campus administration released its agreement, highlighting the pervasive lack of transparency in the sector.

These critical consumer protections could still be weakened if the financial lobby drowns out student voices during the agency’s public comment period. If you or someone you know has experienced problems with third-party financial aid disbursers, please weigh in with your story and your endorsement of these rules here.