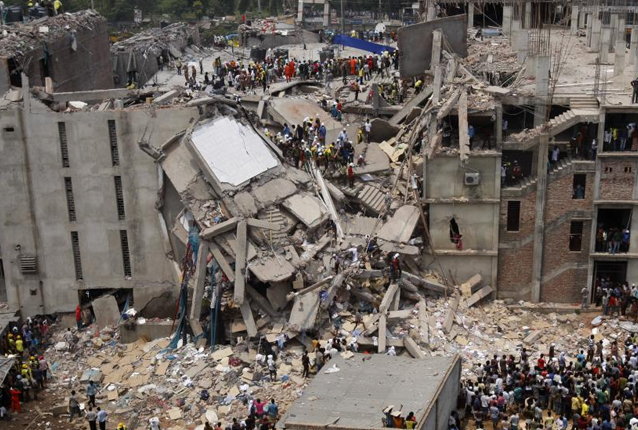 The Rana Plaza garment factory collapsed on April 24, 2013 in the worst garment catastrophe in history. Photo via Wikimedia

April 24 marks the one-year anniversary of the collapse of the Rana Plaza building in Bangladesh, where at least 1,138 people were killed and more than 2,500 were injured. Known as the worst garment industry catastrophe in history, the building collapsed only months after the deadliest factory fire in Bangladesh’s history destroyed the Tazreen factory in Dhaka, killing at least 117 people. Both tragedies occurred at facilities manufacturing garments for highly profitable western brands, including Walmart.

Many think these tragedies could have been prevented if the companies had enforced stricter safety protocols and improved working conditions. Walmart had previously demonstrated some willingness to take responsibility for the conditions along its supply chain. The company moved $200,000 to Cambodian workers after a supplier abruptly closed down operations without paying them, signed on to the Fair Food Program with the Coalition of Immokalee Workers to boost wages for farmworkers in Florida, and cut its contract with C.J.’s Seafood, a Louisiana seafood supplier, after workers there went on strike to protest forced labor conditions.

However, one year later, victims of both tragedies in Bangladesh remain woefully undercompensated, and Walmart’s response leaves much to be desired. Walmart has contributed a paltry $1 million to the Rana Plaza Donors Trust Fund – which amounts to just $500 per family – a deep underestimation of the value of human life, let alone the health and survival costs of workers’ families. In Tazreen, the company has yet to sign onto the Accord on Fire and Building Safety in Bangladesh. This transparent and legally binding accord, agreed to by more than 150 companies, two global unions and 10 Bangladeshi unions, ensures factories honor worker representation, independent building inspections and safety standards review.

Walmart is the largest retailer and the largest private-sector employer on Earth, with more than 10,000 retail locations and $15 billion in annual profit. Walmart’s labor practices and standards affect the lives not only of its 2.2 million direct employees, but also millions more workers in its global supply chain. With Walmart’s reach extending throughout the world, it will take a global movement of workers and consumers to demand accountability from the company.

As part of our efforts in building this movement, we hosted a webcast featuring speakers from three continents representing workers on Walmart’s supply chain. Panelists from Bangladesh, the Netherlands, India, Cambodia and the United States discussed strategies to address the deadly reality of Walmart’s globalized supply chain.

Roy Ramesh of IndustriALL Bangladesh argued against any characterization of the Rana Plaza factory collapse as an “accident,” instead calling it “industrial homicide” and the result of gross negligence. As recently as a day before the collapse, major cracks were observed in the building. The next day, managers required employees to show up for work and falsely claimed the cracks had been repaired.

Anannya Bhattacharjee of the Asia Floor Wage Alliance (AFW) explained why global buyers need to take accountability for the injustice of globalized retail:

Meanwhile, workers in Walmart warehouses in the United States are facing similar dangers on the job. Workers in Indiana have alleged numerous safety problems at a warehouse owned by Walmart – from propane-powered forklifts catching fire to a lack of fire alarms or working sprinklers.

After working at the warehouse through a frigid winter with no heat, David Fields was one of two workers who was fired after circulating a petition demanding better wages, full-time employment and safer working conditions. Given Walmart’s record of retaliating against employees who exercise their rights, Walmart whistleblowers are often risking their livelihoods to protest inhumane, dangerous working conditions. Asked why he was continuing to speak out after being fired, Fields said, “I want everybody to know exactly how Walmart works.”

A stronger global movement of courageous workers like Fields, along with their allies, demanding change could be the tipping point needed to prevent future “industrial homicides.” Jobs With Justice will continue to expand our collaboration with our friends across the globe to demand justice from Walmart.

To hear a full recording of our global webcast, visit http://bit.ly/RanaPlazaReduxRecording