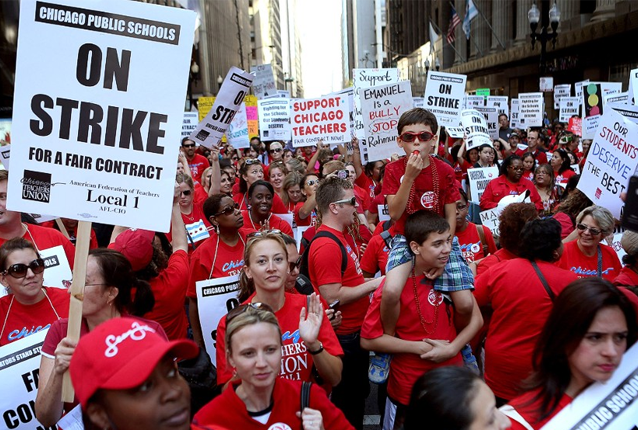 Since the façade of economic stability fell in the United States during the 2008 financial crisis, millions of people have taken to the streets. Fed up with government bailouts of those who had caused the crisis, fed up with corporate practices which depleted American cities of well-paying jobs, and fed up with elected leaders simply not listening to them, activists from both the left and right side of the political spectrum are demanding change – and continue to do so, even today.

Journalist and labor historian Sarah Jaffe explores whether the fragmented neoliberal status quo of today will last by investigating movements on both sides of the aisle in the recently published and critically-acclaimed Necessary Trouble: Americans in Revolt. Jaffe has published stories in The Atlantic Magazine, The Nation, The Guardian and other outlets and co-hosts the podcast “Belabored.” Her experience as a journalist comes to bear in how she views American social movements in the book. In her stunning survey of contemporary American political movements, she shows readers how and why today’s fragmented economic order might come to a screeching halt, through the eyes of activists on the ground who seek a more just society.

The author divides the book into distinct, focused chapters, analyzing each event or movement—whether it be the Movement for Black Lives or the Chicago teachers’ union strike in 2012—as if it occurred in a vacuum. Jaffe pauses every now-and-then to reflect on its role in the larger context of American politics and society.

In her opening chapter, Jaffe explores frustrations on the fringes of both the progressive and conservative movements with the government bailout of Wall Street banks after the 2008 financial collapse. Jaffe goes to great lengths to show how bankers would convince hopeful homeowners that they could afford subprime mortgages, even if they qualified for better rates—a systematic practice which played a significant role in the financial crisis. She compares and contrasts Occupy Wall Street with the Tea Party movement and draws a thick dotted line which connects the two movements as anti-establishment campaigns, both committed to restoring the U.S. government as a government of the people and for the people, albeit in different ways.

Jaffe delves deeply into the nuances of American capitalism throughout the book, providing the reader a roadmap to understanding the rebirth of American activism. She saunters through a short history of Walmart, the retail giant which has effectively been able to set substandard labor practices by very virtue of its size, and the efforts to organize its employees. She also explains and shows how credit has been used as a crutch to stave off stagnating wages since the 1970s; and she rightfully connects disastrous austerity policies in the European Union to the policies pursued by conservative statehouses across the United States.

The 287-page book, now available exclusively in hardcover format, is a valuable resource for anyone who is interested in understanding the complexities of American society. The movements on display in Necessary Trouble shine a light on how the abnormal political and social climate of today came to be. Jaffe’s detailed reporting explains how unemployment in formerly manufacturing-centric regions, how austerity policies in statehouses across the nation, and how the lack of a bailout for the American worker culminated in a new era of political activism and a new era of political actors.

Necessary Trouble: Americans in Revolt is a sobering look at the struggles and demands of working Americans, many of whom feel they have been left behind by both Democratic and Republican policies at all levels of government. It provides an extraordinary overview of the newly-revived American labor movement, the push for a more just economy by the everyday people who are navigating the neoliberal status quo, and the forces that brought them into the streets in the first place.