How Much Will Uber Spend to Get Its Way? 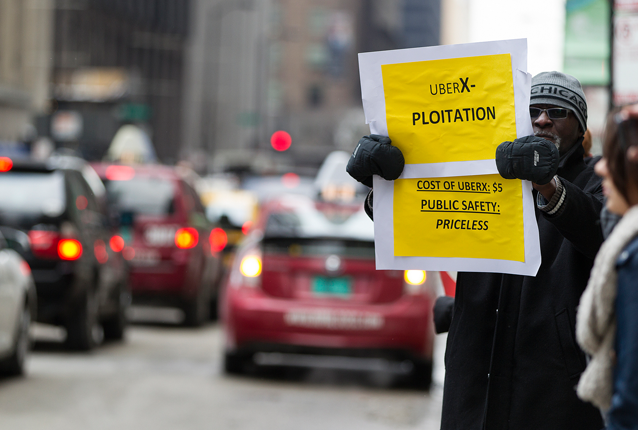 Most people associate Uber with cheap rides (unless prices are surging), occasional safety concerns, unethical monitoring of journalists, troubling data privacy protections and employee misclassification troubles. But Uber, which provides an on-demand driving service through a mobile app, has recently made waves in another field: lobbying.

With 250 lobbyists and 49 lobbying firms, Uber has a lobbying force that is bigger than Walmart’s. These lobbyists, who fight tooth and nail to ensure that Uber can operate freely with little to no regulation across the country, don’t come cheap. In Texas, Uber plans on spending up to $945,000 on lobbying costs this year. In 2014, the company spent $684,000 in California, $600,000 in Seattle and $314,000 in Washington, D.C. Those figures don’t even include the huge outlays for advertising and public relations campaigns that often accompany lobbying efforts.

So what exactly does Uber think is worth millions in lobbying costs? The company wants to maximize profits by fundamentally changing what is expected of transportation providers. Uber has already employed strategies like under-insuring its drivers, minimizing international tax payments, refusing service to disabled passengers and classifying its employees as independent contractors to avoid providing key workplace benefits or negotiating a union contract.

Uber is able to maintain its barely-regulated business model by dedicating millions to lobbying the policymakers who are in charge of regulation. Since Uber isn’t subject to the same regulations as traditional transportation services due to the company’s powerhouse lobbying, Uber can charge lower prices that push the highly-regulated taxi industry out of business. Uber, it appears, ultimately wants to fully replace taxi companies and take complete control of the market.

While Uber’s lower prices might seem great from a customer’s perspective, those rates are the result of tax avoidance, dangerously low regulation and bad labor practices. And if Uber succeeds at replacing taxis, the company will no longer be bound to low prices. As we have already seen with its surge pricing feature, Uber is perfectly happy to raise prices whenever there’s a high demand for vehicles.

Uber’s most recent lobbying attack has focused on New York City Mayor Bill de Blasio, who recently proposed capping the number of new Uber vehicles for a year as in an effort to reduce traffic congestion. Uber has spent roughly $10 million on television advertisements, and is using social media to promote a petition calling on de Blasio and New York’s city council to reverse their decision. The company hasn’t hesitated to get aggressive in its anti-de Blasio efforts. Former New York Times labor reporter Steven Greenhouse said he received a robocall from Uber about the issue, even though he is on a “Do Not Call” list. Uber also utilized its mobile app in the campaign, adding a mock “De Blasio’s Uber” feature for users in New York City to further blanket its message and mobilize its customer base against the proposal with unproven claims that de Blasio’s new rule will lead to 25 minute waits for cars..

A BuzzFeed analysis of Uber’s campaign against de Blasio described the company’s motivation in pursuing such an expensive, cut-throat apprach: “Uber has endless cash, real panic about getting capped in its biggest market, and every incentive to make an example of the high-profile New York mayor.”

The growing on-demand economy, where companies like Uber meet customers’ driving and grocery shopping needs at any given hour and location, has certainly shaken up the market. While innovation is critical to development, we need to make sure the on-demand model is implemented in ways that help everyone thrive, not just corporate CEOs. In the case of Uber, it’s become increasingly clear that the on-demand business model does not benefit everyone.

Last September, Uber drivers in New York City protested after all Uber rides were discounted. Driver Oris Fortuna explained the negative impact of the policy to Business Insider: “Since Uber implemented the 20% off discount on all Uber rides, I’ve been losing $200 a week. To make up for it, you have to work 20% more. That means more mileage and more gas. An $8 trip is not worth it…There’s no union representing us, so we have to protest.”

Uber needs to address serious questions about its employment practices and impact on the broader economy. But the company has chosen instead to spend its time and money on shutting down any opposition or criticism. This money surely could be put to better use. Imagine if the money Uber spent hiring lobbyists and purchasing TV ads went to the drivers who work hard for them every day.

Instead of vigorously fighting against recommendations on how Uber can best help its employees and customers, the company should work with policymakers to create a better business model. The end goal of innovation should be more than soaring profits – it should also include satisfied employees and local residents.

4 Comments on “How Much Will Uber Spend to Get Its Way?”