From Coast to Coast, Working People Fight for Stable Schedules 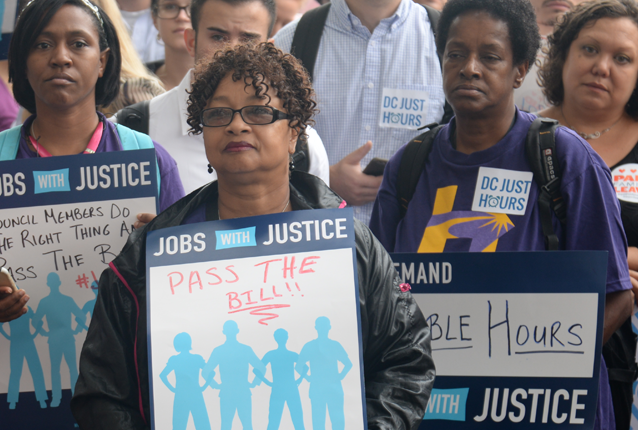 Update (10/21/16): Since we published this post, the Emeryville, California City Council unanimously approved legislation that will require large retail employers to publish work schedules two weeks in advance, pay extra compensation for last-minute schedule changes and provide opportunities for part-time employees to work more hours before hiring another person. This is just the latest victory in the fight for stable work schedules. Citizens of another California city, San Jose, will vote on similar rules in the November 8th general election.

In the years since the financial crisis and the great recession, working people have increasingly faced a big challenge to being able to make ends meet and provide for their families: unstable work schedules. But a few years ago, working people began to effectively fight back against the trend of corporations assigning unpredictable schedules and unsustainable hours. To address the issue, in late 2014 community leaders, labor advocates and people who work for large chain retailers in San Francisco came together and enacted the first set of comprehensive and meaningful standards. Now 40,000 people who work in retail and restaurant establishments have stronger guarantees of a fair and consistent schedule.

Since that landmark victory, organizers and advocates have taken notice, launching legislative and corporate campaigns aimed at writing new rules to bring balance to our economy. Decision makers have taken note, and Attorneys General have launched investigations into abusive on-call schedules. As a result, many well-known retail chains have pledged to abandon the practice of insisting that employees keep their schedules open and lives on hold for shifts they may never be assigned to or paid for.

But on-call scheduling is only one part of a larger problem for a significant number of people who serve our food and ring up our purchases. A recent study by researchers at the University of California, Davis found nearly 40 percent of employees experience varying work hours. Without the ability to rely on a consistent schedule and regular hours from their employers, men and women have a difficult time budgeting and providing for their families. Raymunda Alfaro, who has worked at a Taco Bell restaurant in Washington, D.C., for more than three years, said, “most of the time I don’t have the same hours or the same day off. It is hard for me to plan childcare in advance and to know if I will work the same hours every week.”

Earlier this week, lawmakers in Seattle, at the urging of groups like Working Washington, took up this issue, unanimously passing legislation that will ensure predictable schedules for tens of thousands of people working in the city’s retail and food service industries. And last week, New York City Mayor Bill de Blasio announced his intention to pass legislation addressing this issue in the fast-food industry.

Given this progress, corporations and their lobbyists are stepping up their opposition, justifying their scheduling policies as what they need to maintain operational “flexibility.” This opposition has led policymakers in Washington, D.C., and Minneapolis to draw back from passing similar legislation. But even as these bills have been pushed to the side for 2016, legislative champions are laying the groundwork for a successful push in 2017.

As more retail chains end on-call scheduling, they’re proving that unfair scheduling practices are by no means necessary for these businesses to be successful. And despite what the Chamber of Commerce would like us to think, a majority of business leaders support predictive schedules measures.

For many people, the amount and regularity of hours they work can be just as important as the wages they earn. As more political leaders and companies hear the collective voices of working people uniting on what they need to sustain their families, we can expect to see more positive change. In the meantime, we must remember that just as these employers actively choose to implement erratic and unsustainable work policies, they can choose to end them as well.