Fired for Organizing? There’s a New Bill for That. 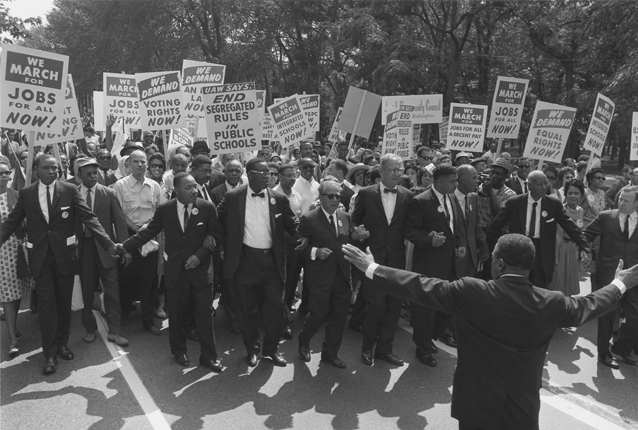 The civil rights movement argued that all workers should be able to organize as a civil right, demanding access to jobs and fair employment practices. Photo via http://officialmlkdream50.com

Last week, Representatives Keith Ellison (D-Minn.) and John Lewis (D-Ga.) introduced a bill that would strengthen protections for workers who are retaliated against for supporting a union. The Employee Empowerment Act would give leverage to workers trying to exercise their right to organize without fear of intimidation by their employer. Specifically, it would allow workers to pursue in federal court compensatory and punitive damages for discriminatory employment practices taken against them for their union support. If passed, this bill would enhance potential penalties for unionbusting employers who retaliate against union supporters by unlawfully changing their terms and conditions of work.

Currently in the private sector, many workers still depend on the National Labor Relations Act (NLRA) to protect them from exploitative employer practices. The NLRA was passed in 1935, spurred by the efforts of a new and vibrant labor movement. It allowed hundreds of thousands of workers to form and join unions and collectively bargain and expanded the social safety net in ways that increased standards for all workers.

However, the NLRA was created to maintain the free flow of commerce by compromising with workers, not necessarily to protect workers’ inherent civil and human rights, as the Employee Empowerment Act attempts to do by allowing meaningful financial and legal penalties to be brought against employers who aren’t respecting their workers’ rights. “Remedies for violating the NLRA are weak,” said  the Leadership Conference on Civil Rights. “[A]nd unlike Title VII of the Civil Rights Act and other labor and employment laws, no penalties for violations exist.” The NLRA currently affords no fines or other forms of punitive damages for violations of the law. As a result, it has become standard practice for workers to be subjected to threats, interrogation, firings, harassment, surveillance and retaliation from their employer for their support of a union. While these actions are typically unlawful, employers who commit them know they don’t have to worry about significant financial penalties under the NLRA.

In addition to having no teeth, the NLRA never included all workers. For example, in return for the vote of southern Democrats, many workers in positions typically reserved for Black workers were excluded – including agricultural and domestic workers. Even today, a quarter of the workforce is excluded from the protection of federal labor law.

In the years following the enactment of the NLRA, many social movements – including the historic civil rights movement at its peak in the 1960s – argued that all workers should be able to organize as a civil right, demanding access to jobs and fair employment practices. It should come as no surprise then the growing movement of workers who were excluded by the protection of the NLRA would form the United Workers Congress in 2010. The UWC contends that a worker’s right to organize should be housed not in commerce law, as the NLRA is, but in the 13th Amendment that abolishes slavery and other forms of servitude.

Nearly 80 years after the NLRA was enacted, large corporations and business interests have continued to erode the law as a source of worker protection, even manipulating it at times to protect the interests of employers over workers. You know something is awry when the U.S. Chamber of Commerce has even defended the NLRA, so as to prevent workers from standing up for their rights outside of the NLRA and limit the scope of worker organizing. Even those who are still technically protected have discovered that it can take years to resolve an unfair labor practice. And those delays often work to the advantage of the employer.

The Employee Empowerment Act aims to remedy this – expanding what workers can do to combat employer retaliation by giving workers a private right of action if their employer is found guilty of discriminating against them in regard to hiring, tenure or terms and conditions of work in order to encourage or discourage support of a union.

Men and women should be able to exercise their right to organize without fear of retaliation and trust that law-breaking employers will be held accountable. The backdrop of the legislation is organized in community-based worker centers and other nontraditional associations – fighting for dignity and respect, NLRA-protected or not. Southern Black autoworkers are organizing with the United Auto Workers in Mississippi, Tennessee and other states in the Deep South, despite many of the most backward laws and risks in the country. And the National Guestworker Alliance has emerged to organize some of the most precariously protected workers, brought to the country on visas that often make them beholden to one employer – modern-day indentured servitude.

It is this growing movement of workers that will only pick up steam from the introduction of the Employee Empowerment Act – providing new on-ramps to expand the stage on which workers can organize and collectively bargain without fear of retaliation and thus rebalancing the future of work back toward the needs of workers themselves. While a more robust and modern labor law is desperately needed to fully protect all workers’ rights to organize in our 21st century workplaces, the Employee Empowerment Act is an important step in the right direction.

4 Comments on “Fired for Organizing? There’s a New Bill for That.”