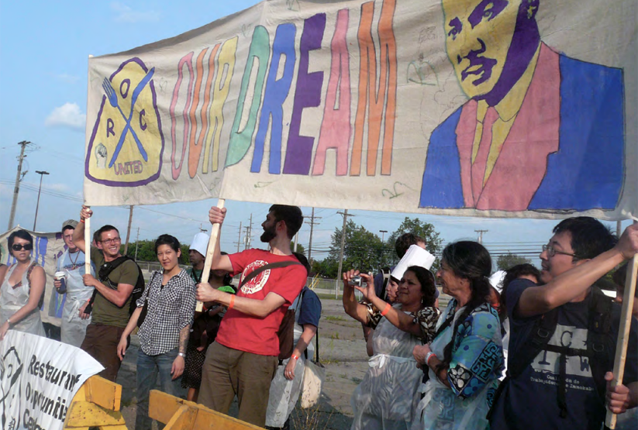 Today many workers who try to band together to improve their jobs through traditional workplace organizing face significant impediments at the hand of hostile employers and outdated labor laws. Those challenges are even more noteworthy for the nearly quarter of the workforce that has no protection under the federal National Labor Relations Act or any other labor law to organize – and for the millions of people who are unfairly and irrationally excluded from basic labor laws that provide for overtime and minimum wages.

To meet this challenge, worker centers emerged as an alternative form of worker organization more than 25 years ago. Driven by the need to provide more people in low-wage jobs with the means to better their working conditions – especially those who have been traditionally excluded from the protection of labor law – worker centers have been increasingly effective in expanding the rights of men and women against the backdrop of weak, insufficient or restrictive labor rights and in a pervasive anti-union climate. The National Domestic Workers Alliance, for example, has been able to pass Domestic Workers Bill of Rights legislation in a number of states in recent years to ensure nannies, house cleaners and elder care providers have access to basic labor and employment protections.

Worker centers have also been leading efforts to secure decent wages from employers, both by fighting for raises in the minimum wage and also demanding fair hours and scheduling practices that help guarantee a more stable annual income for workers in many sectors. Several worker center groups have won sizable legal victories in the fight against wage theft, ensuring that workers are actually paid the wages to which they are legally entitled. And worker centers and other new worker organizations like OUR Walmart have made serious waves by directly and publicly challenging the unfair wages and practices of corporations like Darden, McDonald’s and Walmart and their global supply chains. In 2012, for example, the National Guestworker Alliance exposed forced labor from a Walmart seafood supplier in Louisiana eventually winning $248,000 in back wages, fines and penalties for the workers.

A new briefing paper released this week by the United Workers Congress offers a landscape of the origins of worker centers, detailing some of their notable successes in fighting for a fair economy and debunking some of the recent smear campaigns launched by corporate front groups against worker centers. According to the briefing paper, The Rise of Worker Centers and the Fight for a Fair Economy, “As worker centers and other new worker organizations have started to gain momentum in the movement for fair wages, corporations have started to take notice of their work and to collectively attack the worker center and broader low-wage organizing field.”

Business associations like the U.S. Chamber of Commerce and the National Restaurant Association have spent millions on lobbying and running distortion campaigns about unions and worker centers on behalf of their low-road employer members for decades. Threatened by the prospect of having to pay their workers more, these companies often hire lobbyists and public relations firms to do their dirty work. Some have even set up phony front groups dedicated to attacking worker centers and their allies in the media. But as public debate and support for raising wages escalates, the spotlight on wealthy corporations paying their workers poverty wages continues to get brighter.

This new briefing paper helps to unveil some of the smokescreens around these attacks and identifies a number of the bad corporate actors that are desperate to protect the status quo. But even in the face of these attacks, worker centers aren’t slowing down their efforts. Visit the United Workers Congress website to learn more about worker centers or get involved in one of many upcoming events around the country organized by worker centers and allies in their effort to push for a better wages and a better economy.