An Open Letter to Mike Rowe 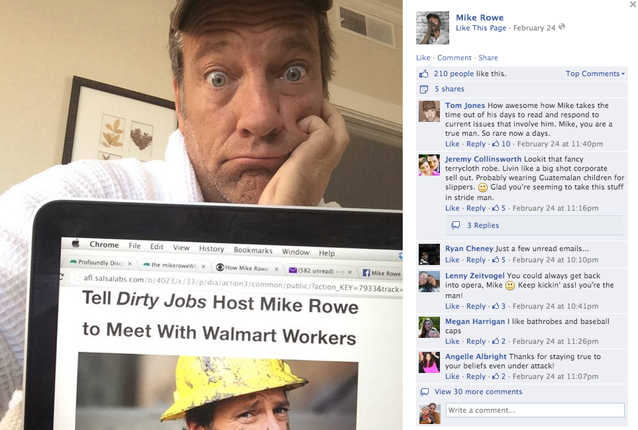 Dirty Jobs host Mike Rowe wrote a response to our campaign to get him to meet with Walmart workers. Below is our letter back.

Thanks for taking the time to respond to us directly on your Facebook page.

Jobs With Justice is a nonprofit organization committed to activism and lifting workers’ voices, which is why we’re frustrated that you’ve written a letter directly to Ori – one of our organizational spokespeople – instead of addressing the people who emailed you or the workers who are asking to meet with you.

We can all agree that Walmart is a divisive company, as demonstrated by the many emails you’ve received from our activists, on top of the thousands of comments on your Facebook page. When we heard your voice in one of Walmart’s new ads, our genuine hope was that we could build common ground around issues facing working people in this country, and in particular, at Walmart. While we do not directly represent or organize Walmart associates, Jobs With Justice strongly supports Walmart workers in their efforts to improve their working conditions and achieve sustainable jobs. That’s why we urged our supporters – many of them your fans — to email you and ask you to meet with real Walmart workers who have been calling on the company to be a better employer.

Walmart is a big deal because of its influence on our entire economy – a point you’ve made yourself when talking about their new PR campaign. But it’s hard for us to trust Walmart’s promise to invest in U.S. manufacturing when they’ve made a pledge to change before and the results have been questionable at best. Instead of following through on that pledge, the Alliance for American Manufacturing reports that Walmart actually upped its overseas purchasing and increased pressure on its suppliers to reduce costs, even if that meant outsourcing at our economy’s expense.

Of course, we agree that Walmart should invest in products made in the United States, but manufacturing is just a small piece of the puzzle, given that the company employs 1.4 million people in this country and sets standards for the entire retail economy. That’s why Walmart also needs to rebuild America by investing in the workers it already employs. Change at Walmart doesn’t start with an ad campaign, it starts with the actual workers who are a core part of Walmart’s success and yet are subject to low wages, erratic scheduling, dwindling benefits and retaliation when they try to raise these issues with their bosses.

Without recourse or a voice at work, these associates are trying to call attention to the harsh realities of working at Walmart however they can. That’s why they want to sit down with you; so they can explain why this ad and your defense of the company don’t match up to their experiences working there. We’re not asking you to take sides between Walmart and its employees, we’re simply asking that you hear another side of this story – the one that the ad you narrated isn’t telling.

In truth, we actually reached out to you because of your foundation and the great work it does in helping train and educate working people. We are big supporters of apprenticeships and the skilled trades, but your claims that retail jobs are increasingly obsolete – and therefore not worth the time and investment to improve – is way off base. In fact, retail workers – the ones who work at Walmart and other stores (and the ones who likely sold you that amazing bathrobe) – belong to one of the fastest growing industries in our country and also one of the lowest paid. Those jobs are the product of a much larger problem: the way big, profitable corporations protect their bottom line at the expense of their workforce. So while we applaud the efforts of your foundation, it’s quite unlikely those efforts will address these systemic issues and actually help people who work at Walmart.

Jobs With Justice is working to create an economy that doesn’t have to rely on the generosity of people like you and the work of your foundation – private companies like Walmart can and should pay their workers enough to make ends meet. Our guess is that if you actually sat down with Walmart associates, they’d tell you that what would help them is being paid more and being paid fairly, so they could not only support themselves and their families without relying on public assistance, but could also invest in their own education and future and create their own opportunities.

Even without our emails, you’ve drawn some incredible attention to yourself as it relates to this issue. All we’re asking is that Walmart workers have a chance to have their voices heard as well.

Update: A few days after we penned this letter to Mike Rowe to restate our sincere appeal to him to meet with Walmart workers, he responded to our letter on his Facebook page. Our collective outreach to Rowe compelled him to engage in a productive public discussion about Walmart’s labor practices. Unfortunately, Rowe has not yet agreed to meet with the Walmart associates who want to share their perspectives about working for the company. OUR Walmart continues to reach out to Mike Rowe directly in order to facilitate an in-person meeting. Nevertheless, with the help of thousands of people who want Walmart to do better, our campaign provided a platform to increase public debate about Walmart’s disastrous impact on jobs and our economy. Thanks for engaging with us in this effort and in our ongoing work to change Walmart and change our economy!

168 Comments on “An Open Letter to Mike Rowe”