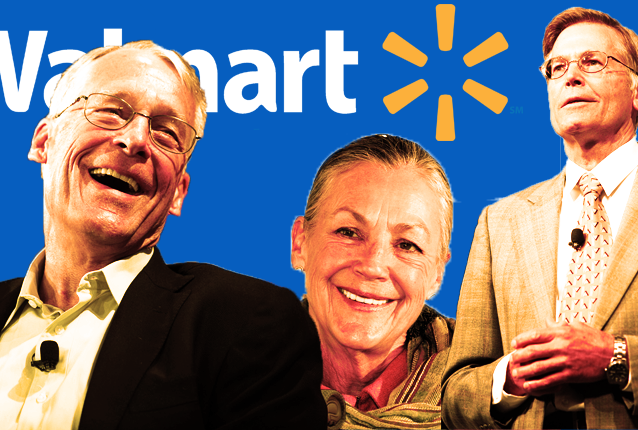 America’s richest family contributes almost none of their personal wealth to the family’s charity, according to a new report by the Walmart 1 Percent.

The Waltons are the wealthiest family in the United States and control a majority of shares in Walmart. Six members of the family are among the 85 wealthiest individuals in the world, a group whose wealth is greater than half of the world’s population.

While other extremely wealthy philanthropists, such as Bill Gates and Warren Buffet, contribute over 25 percent of their net worth to their charitable efforts, members of the Walton family have given less than 0.04 percent to their family foundation. Meanwhile, according to The Chronicle of Philanthropy, ordinary middle-income Americans contribute six percent of their income to charity.

The report is based on an analysis of 23 years of tax returns from the Walton Family Foundation and outlines just how little members of the Walton family have contributed to their family’s charitable foundation over that period:

Rob Walton, chairman of Walmart’s board of directors, has not made a single contribution to the Foundation.

Alice Walton has not given a single dollar to the Foundation.

Jim Walton made one personal contribution of $3 million to the Walton Family Foundation, more than 15 years ago.

The total contributions of Rob, Jim, Alice, and Christy Walton, and their family holding company to the Walton Family Foundation amount to $58.49 million, equivalent to:

Instead of contributing their own money, the Walton family relies on charitable lead annuity trusts (CLATs) to fund the foundation. The report suggests that the primary role of the foundation is not to give charitably, but rather to increase the family’s personal wealth through tax avoidance schemes. Using CLATs, a previous report released by Americans for Tax Fairness indicated the family successfully avoids an estimated $3 billion per year in estate taxes:

“CLATs are a type of trust invented by financial planners to take advantage of loopholes in the tax code with the objective of minimizing gift and estate tax liability when family wealth passes between generations. Among financial planners serving wealthy clients it is widely understood that, under the right conditions, a CLAT can be used to completely eliminate – or ‘zero out’ – estate and gift taxes on the inter-generational transfer of wealth.”

Members of OUR Walmart, the organization of current and former employees calling for higher wages and better working conditions at Walmart,  have questioned why they must rely on food stamps when they work at the most profitable company in the country, owned by one of the world’s richest families. The gap between the Walton family and its employees is staggering. Last year, for example, employees at one store in Canton, Ohio, gained national attention after hosting a holiday canned food drive for each other. Without adequate hours and wages, many Walmart associates are forced to rely on taxpayer-funded assistance such as food stamps and Medicaid.

As part of their ongoing effort to stand up to Walmart’s greed, this week members of OUR Walmart will be going on strike in cities across the country to bring attention to the company’s retaliation against employees that have spoken out against income inequality. As documented in our 2013 report, many employees that have spoken out for better working conditions at Walmart have faced retaliation, including being outright fired.

As controllers of the majority of Walmart shares, the Waltons are in a position to provide hourly associates among the company’s 1.4 million employees a much-needed pay increase. Despite their extreme wealth, the Waltons have ignored calls from Walmart employees to provide adequate hours and a minimum annual compensation of $25,000.

While Walmart hourly associates struggle to make ends meet, the company’s board approved significant compensation packages for top executives this year. A Walmart CEO earns 1,034 times the average workers’ salary, the highest CEO-to-worker pay ratio among Fortune 500 companies. Incredibly, Walmart’s new president and CEO, Doug McMillon, recently claimed he’s just another associate, despite being compensated $9.56 million last year. As long as the Waltons continue to ignore the cries of Walmart associates in favor of increasing their own personal wealth, employees at the world’s largest retailer will continue to be forced to take bolder action to make their voices heard.