Say NO to Fast Track 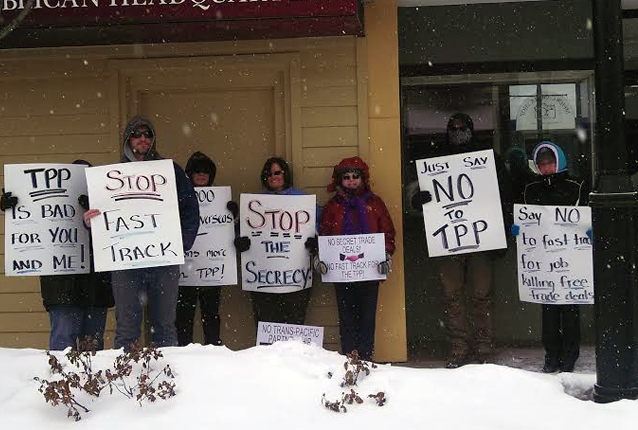 Given that we’re used to a slow moving Congress, it’s understandable that “Fast Track” legislation sounds promising. Unfortunately, Congress will soon consider “Fast Track,” which would limit debate and prevent amendments in Congress on trade deals. Such expedited authority would make it much easier to pass future trade agreements, including the proposed anti-worker Trans-Pacific Partnership agreement.

Jobs With Justice opposes “Fast Track”  because it is a license to continue trade policies written by the 1% for the 1% without an ability to hold our country’s negotiators accountable for provisions that hurt working families.

Trade agreements like the Trans-Pacific Partnership, drafted by special interests in the backrooms of power, should be subject to vigorous democratic debate. “Fast Track” limits Congress’ ability to oppose specific provisions within trade agreements that would never pass on their own. We know from the record of failed trade deals like NAFTA that these provisions have a devastating impact on workers and their communities.

Americans deserve a fair process that gives Congress the opportunity to influence trade deals and to send bad trade deals back to the negotiating table for improvement. If you agree, join with Jobs With Justice and groups across the country who are calling on Congress this week to say NO to fast track.

UPDATE – 2/6/14: Last week, hundreds of thousands of people across the country attended protests, rallies, and contacted their members of Congress to voice their opposition to any legislative attempts to fast track bad trade deals. In response, Senate Majority Leader Harry Reid (D-Nev.) publicly confirmed he had no interest in advancing “Fast Track” legislation in the Senate, despite the Obama administration’s urging.

Unfortunately, there’s still momentum to rush through dangerous free-trade agreements in the House of Representatives.

Learn more about why fast track is bad policy below or in this must-read editorial by former House Democratic Whip and Jobs With Justice board member David Bonior.