Jobs With Justice at 35: Don’t Play With My Money 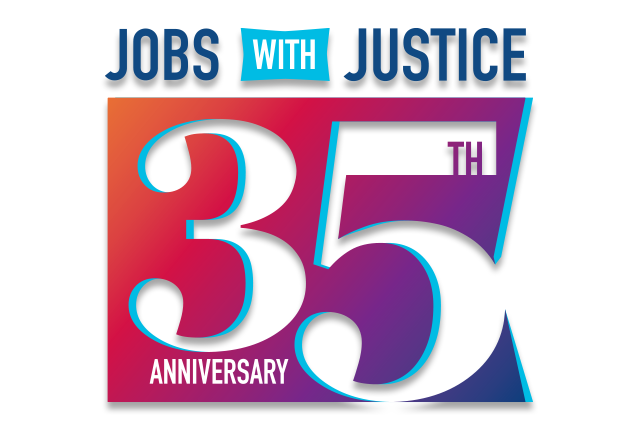 This year, Jobs With Justice is celebrating its 35th anniversary, and this post, among others, is meant to celebrate our collective rich history and show appreciation for important campaigns throughout the years that are examples of what it means to stand together in solidarity against corporate greed and exploitation. For the rest of the year, we will be revisiting the important work our coalitions have taken part in over the years and celebrating our history in a variety of different ways. Our first post looks back at a transit worker strike in Northern Virginia and a catchy song produced in the process.

In that tradition, this tune, “Don’t Play With My Money,” is brought to you by the ATU Local 689 Cinder Bed Road striking workers in Northern Virginia, who in 2019 put together the song to bring attention to their strike for better wages, risking foreclosure and eviction. The workers stood together and went on strike to demand DC Metro to step in and do something about Transdev. Transdev is a third-party contractor employed by Metro that ran the Lorton garage in late 2018 and paid its workers nearly $12 less per hour than other public sector transit workers. Transdev and WMATA refused to acknowledge the workers’ demands up to that point. Weeks into the strike, as the workers grew frustrated with the lack of action from the contractor, they put together a powerful song and music video accompaniment reminiscent of singer Anthony Hamilton. DC Jobs With Justice took action to mobilize community support of these brave striking workers. Efforts included going to WMATA board members’ houses to picket, rallying, and interrupting the WMATA board meeting, demanding that they make Transdev bargain. They even took striking workers to the Wilson Building (DC’s city hall) and had them meet with Councilmembers.

On January 16th, 2019, the ATU Local 689 members voted overwhelmingly to approve a collective bargaining agreement with Transdev, ending the strike, the longest transit strike in the region’s history and the first strike at a MetroBus garage in 41 years. For the 120 workers that took part in the strike and the many workers that have come afterward, “Don’t Play With My Money” will almost certainly continue to be both a rallying cry and anthem.