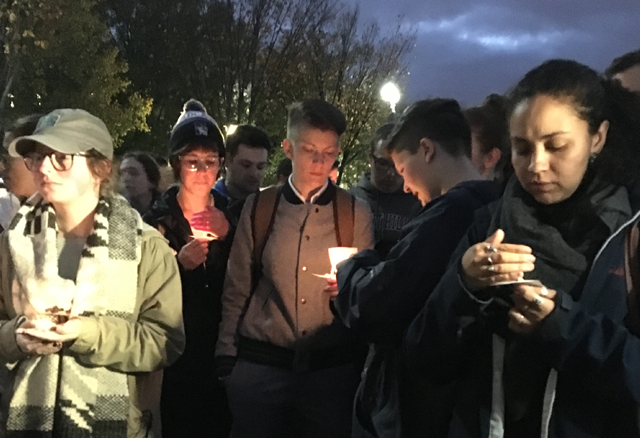 After this week’s election, Jobs With Justice is more invested than ever in expanding the ability of working people to negotiate for better workplaces, a more inclusive economy and thriving communities.

Our oxygen is hope and resilience. We exhale fear. We will continue what we always do: organize, movement-build, and unite. We will join hands, pledge our solidarity, and resolve to forge ahead even in this moment of peril and challenge.

Working people and their advocates should not back down from pushing forth a progress agenda that benefits working families. This week, the election results confirmed that our values win, even when candidates who uphold them don’t. Votes were cast in favor of policies that will boost working people’s ability to provide for their families, and also will significantly impact women and people of color. And barriers were broken when voters elected the first Indian-American and Latina women to the U.S. Senate, while Minnesota elected the first-ever Somali-American female legislator.

Voters in Arizona, Colorado, Maine and Washington approved ballot initiatives to increase their state minimum wages to at least $12. In addition to raising the minimum wage, Arizona and Washington state now will require businesses to provide employees with mandatory paid sick days. Maine and Flagstaff, Arizona made history in joining a growing number of jurisdictions that voted to eliminate a subminimum wage for tipped workers. In San Jose, California, voters approved a ballot measure to require some corporations to provide predictable work schedules. From ballot initiatives in Georgia and Massachusetts, and in local races across the country voters chose to boost and invest in public schools. Working people defeated the anti-union right-to-work initiative in Virginia, and won a campaign finance reform measure in Missouri.

We know there are those who will want to use the election to roll back progress, scapegoat and drive a deeper wedge between immigrants, black and brown Americans, and white Americans. It is more important than ever to combat white supremacy and its impact on our jobs, our communities, our democracy, and our ability to live freely in a peaceful society. We will resist violence, threats, racism, misogyny and senseless deportations that tear families apart.

In these moments of uncertainty, we have to come together across communities, race, religion, gender, age, ability, national origin, sexual orientation, and all of our identities, and stand shoulder to shoulder, stronger. Along with our coalitions across the country, we will redouble our efforts to confront injustice and inequality, demand corporations play by the rules, and ensure more of us can earn a fair return on our work. It’s a future worth fighting for.

2 Comments on “We’re Standing Together”