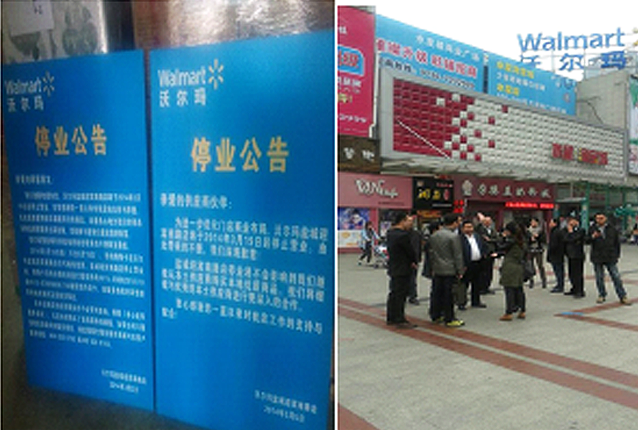 Walmart announced the closure of its store in Chengde, China by posting a notice to employees

In the first organized resistance to Walmart in China, hundreds of workers in the Hunan and Anhui Provinces are demanding compensation after the company abruptly closed a store in Chengde last month. In a letter to the AFL-CIO, one worker from the store described employees being literally dragged from their posts. The closing left 143 workers, 90 percent of them women, scrambling to support their families.

Walmart entered the Chinese market in 1996 and aggressively drove to quickly open more than 400 stores. But now the company has announced it plans to shutter at least 29 stores. The impact of the closures on workers and their families has been devastating.

Walmart expansion into U.S. cities has been similarly devastating, shutting down small businesses and driving down wages around the country. In the United States, Walmart has only closed stores in efforts to stop worker organizing. However, in foreign markets, the company continues to fail to be profitable – leading it to close stores in Brazil as well as China and abandon expansion efforts in India.

The employees allege this most recent store closure in China is in violation of Chinese labor law, which requires prior consultation with workers or their representatives. The workers and their union are demanding twice the legal compensation offered by the company for retrenchment and termination of their contract (one month’s salary per year of service plus one additional month). In addition, they are demanding compensation for expenses incurred since the store closure, such as housing and children’s schooling.

The workers in China aren’t alone as they stand up to Walmart. U.S. store workers are organizing with OUR Walmart for better scheduling and fair wages, workers throughout the company’s supply chain are trying to fight retaliation and wage theft, and survivors of the Rana Plaza tragedy in Bangladesh are still fighting to be fairly compensated. Jobs With Justice stands in solidarity with all workers who are fighting our shared struggle for dignity and respect from the largest retailer in the world.