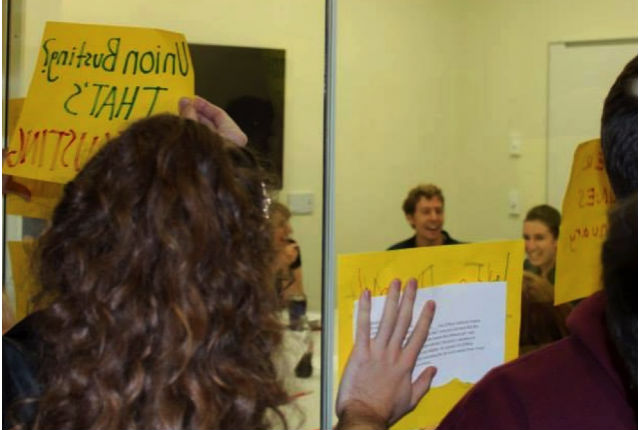 Last week, undergraduate students employed as “peer mentors” at the University of Massachusetts at Amherst won the right to form a union.

The Commonwealth Employment Relations Board, which oversees labor disputes in the state, ruled in favor of the university employees after UMass-Amherst blocked their petition for an election earlier this year. The university claimed that the academic support staff are students, not workers – the same claim that Northwestern University used in their attempts to stop football players from organizing.

Last week’s ruling authorized the peer mentor staff to hold an election to join UAW Local 2322, UMass’s resident assistants’ union and the only RA union in the country.

Peer mentor organizer and UMass junior Jenna Grady said, “We are thrilled for the opportunity to finally have our voices heard!”

This historic ruling has broad implications for all part-time undergraduate student workers in public universities and colleges in Massachusetts. As stated in the ruling:

“The Peer Mentors’ duties are not significantly different than those of student cafeteria servers or members of the gymnasium cleaning crew.”

Because of the organizing efforts of 75 undergraduate workers at UMass-Amherst and UAW Local 2322, thousands of temporary student workers in Massachusetts could gain a voice in the workplace and build power as student workers.

This victory was a longtime in the making. During finals week in winter 2011, UMass-Amherst notified all employees of the peer mentorship program that their jobs would be eliminated in the next school year. Many of these workers were activists in the local Student Labor Action Project chapter and were able to successfully pressure the university to keep the jobs.

After their victory in Spring 2012, the group realized that the only way to stop the university from eliminating their positions on a whim was to gain a real voice in the workplace by forming a union. UMass-Amherst ramped up its unionbusting tactics by proposing that the peer mentors would no longer be compensated as hourly workers and instead become academics compensated with a still undetermined stipend. That proposed change would strip the undergraduate employees of their identity as workers, which added fuel to their organizing.

Winning the right for undergraduate workers at UMass-Amherst to form a union has been a feat – but the fight is far from over. The peer mentors still must fend off the university’s likely upcoming retaliation before their election and must continue to build power among students and solidarity with campus workers and faculty to defeat the university’s proposals to eliminate their positions. With the formation of a union, the group will have stronger footing to defend their jobs and have set a precedent for expanding bargaining for student workers in Massachusetts and the fight back against the corporatization of higher education across the country.