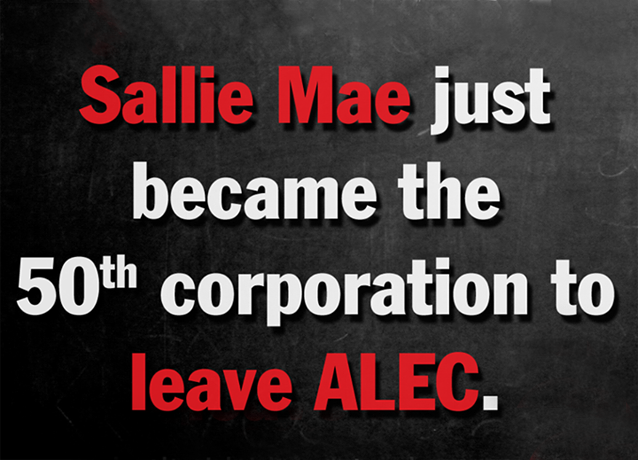 Sallie Mae has quit the American Legislative Exchange Council (ALEC) after months of growing pressure from Jobs with Justice/American Rights at Work, the U.S. Student Association, and the Student Labor Action Project. Sallie Mae is now the 50th corporation to leave the extremist, right-wing group that advances state legislation essentially written by corporations.

“Sallie Mae and ALEC have a track record of pushing a legislative agenda that inextricably links higher education to a lifetime of debt – and a lifetime of customers for Sallie Mae. That’s why it was critical to shine a light on their relationship,” explained Chris Hicks, Student Debt Organizer for Jobs with Justice/American Rights at Work, which is leading a campaign to find solutions to our country’s growing student debt crisis, including holding Sallie Mae accountable to its borrowers.

This victory comes after months of organizing driven by students, community members, consumer activists, and union leaders from the American Federation of Teachers. At Sallie Mae’s shareholder meeting in May, more than 150 current students and teachers turned out to voice their concern about Sallie Mae’s business practices and predatory lending.  In partnership with the Responsible Endowments Coalition, Nathan Cummings Foundation, and AFL-CIO, several students and activists presented a shareholder resolution inside the meeting calling for Sallie Mae to disclose its lobbying practices and specifically end ties with ALEC.

Following the shareholder meeting, students and recent graduates from around the country sat down with Sallie Mae’s CEO, Jack Remondi, and demanded Sallie Mae leave ALEC in June. After being told no, students continued to build up pressure and collected nearly 15,000 petition signatures before ALEC’s 40th anniversary conference calling on Sallie Mae to leave the controversial organization.

Sallie Mae’s decision to leave ALEC highlights the power that students and consumer groups are putting on the organization as they continue to fight for debt relief and put an end to their predatory practices. Student debt is actively standing in the way of the economic recovery, and Sallie Mae is partially to blame.

The News Journal reported that the nation’s largest lender of private student loans “has continued drawing scrutiny from a variety of angles – student activists, regulators and consumer advocates” in an article,  “Sallie Mae drawing all-around fire,” published this weekend.

Hicks continued, “For too long, the company Sallie Mae has effectively skirted regulation, ignored calls for transparency, and stayed out of the public’s eye despite its major role in the student debt crisis. The lender’s decision to leave ALEC is a good first step towards changing that.”

To keep holding Sallie Mae accountable, student activists are increasing their pressure on the U.S. Department of Education to terminate its contract with Sallie Mae to administer government-issued student loans. Click here to learn more and take action.