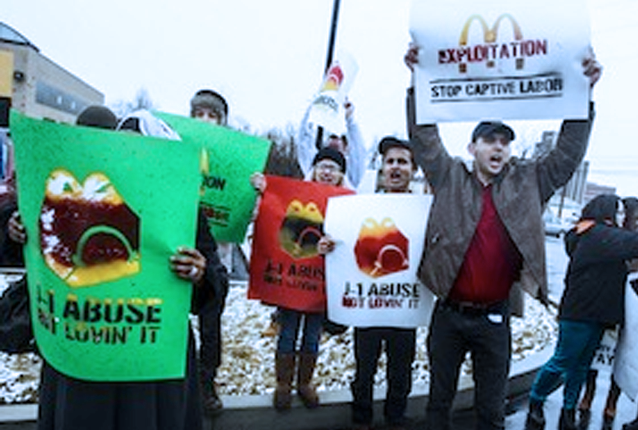 Last year, we publicized the brave protests and strikes the National Guestworker Alliance (NGA) and student guestworkers organized to blow the whistle on retaliation and labor abuse suffered at the hands of McDonald’s restaurants in Pennsylvania. The students, who paid $3,000 to $4,000 for their ‘cultural-exchange’ visas, were shocked to arrive in Pennsylvania to work at McDonald’s under exploitative conditions. They reported working up to 25-hour shifts while earning less than the minimum wage, and faced threats of deportation if they spoke up.

Yesterday, the U.S. Department of Labor found this now-former McDonald’s franchisee guilty of violating the Fair Labor Standards Act. Nearly 300 workers, including 178 of the student J-1 visa holders, are being awarded $205,977 in back wages and damages.

We applaud DOL’s Wage and Hour division for holding employers accountable for wage theft, and are proud to have supported these workers who spoke up about the unjust labor abuse.

The DOL’s enforcement in this case is a great example of how to protect the rights and wages of U.S. workers and guestworkers alike. Unfortunately, our current broken immigration and labor laws make it far too easy for bad employers to use the threat of immigration enforcement as a weapon to squash organizing efforts and trump labor law. That’s why we are committed to advancing solutions for immigrant whistleblowers who are organizing for better jobs and better standards for all workers through our involvement in the POWER campaign.

As our POWER campaign partners at NGA explain,

“As long as employers like McDonald’s can use threats of retaliation and deportation to exploit immigrant workers, the wages and conditions of the U.S. workers alongside them will never be secure. But by protecting the right to organize for the most vulnerable workers, we help raise the floor for every worker in the U.S.”

In addition to being fined by the DOL, the McDonald’s franchisee lost his license to operate a restaurant. Still, a change of management shouldn’t absolve McDonald’s from taking stronger steps to ensure this abuse never happens again. At the end of the day, McDonald’s needs to take responsibility for its role in lowering wages and job standards.

Those low wages end up costing taxpayers an estimated $1.2 billion a year, as they are forced to subsidize fast food workers’ reliance on public assistance to make basic ends meet.

Over the last 15 months, an increasing number of employees at McDonald’s restaurants have come forward to urge the fast-food giant to stop paying poverty wages. McDonald’s workers have walked off the job with other fast-food workers across the country to speak out against unsustainable jobs in the restaurant industry. Men and women working for our nation’s most profitable food chains are rightly calling for a raise from the $7 or $8 being paid currently to $15 an hour, which would offer employees an opportunity to get out of poverty and participate in the economic recovery.

It’s clear that many profitable companies like McDonald’s can pay workers more, they just won’t. And until we demand otherwise by supporting workers’ demands, increasing opportunities for workers to organize and bargain for better wages, standards and working conditions, and insisting lawmakers raise the wage and benefits floor for all workers, businesses will continue to shirk their responsibility to their employees and to our economy.