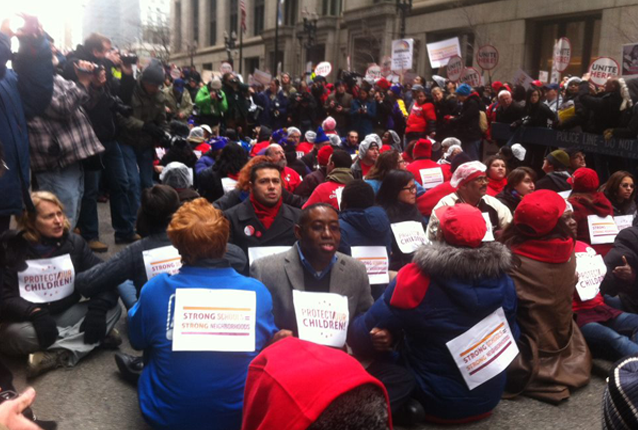 Across the country, the corporate agenda, which holds as a chief objective transforming public education in the US into a privatized, for-profit enterprise, continues to make advances in its agenda. As a result, communities continue to face a preventable crisis where our public schools are labeled expendable by city officials and decisions are made by those serving this corporate agenda to close neighborhood schools, make deeper cuts in schools’ budgets, etc.

Two major cities are examples of parents, students, educators, and allies struggling against recent decisions to close dozens of public schools and displace tens of thousands of students and families from their communities.

In Chicago, on March 27, thousands of teachers, parents, students, and working people took to the streets and surrounded City Hall in Chicago. More than a hundred leaders were arrested during a planned civil disobedience.

The action comes about six months after a successful week-long strike by the 30,000 members of the Chicago Teachers Union (CTU) resulted in a victory for teachers and education advocates, and in many ways changed the conversation regarding the causes and solutions to our national public education crisis. The striking teachers–while fighting over working conditions, benefits and wages, and the role of standardized testing–recognized that there was a bigger fight to be had if educators were going to change and improve the quality of education their students receive.

The CTU and community-based allies knew the Chicago Public Schools system was planning to close down a large number of schools later that year and had a limited amount of time to organize a fight-back. While the announcement was initially expected in December, following the show of strength and support that was the strike – Mayor Rahm Emmanuel moved CEO Jean-Claude Brizzard out and brought in Barbara Byrd-Bennett to “administrate” the public school system. The announcement on school closures was then pushed back to March 2013 – perhaps in hope that the teachers would stop their organizing efforts once removed from their bargaining.

On March 27, 2013 – the mayor and his corporate “education reformers” got their answer.

Similarly, in Philadelphia a similar crisis is happening where city officials recently voted to close 23 public schools (nearly 10 percent) as way to deal with a budget gap.   In response, on March 7 the Philadelphia Federation of Teachers, student, parent and community groups united to organize a major protest of this latest attack on public education and Philadelphia’s most struggling communities.  At this protest, a number of people were arrested including, among others, AFT President Randi Weingarten and Philadelphia Jobs with Justice Director, Gwen Snyder.

In Chicago, the CTU recognized that the strike was but one part of a larger fight over the direction of “education reform” in their community.  Prior to the strike, the CTU was organizing “community boards” with other stakeholders – parents, students, neighborhood leaders, and education advocates to have discussions about the crisis in education and what solutions and outcomes they would want to see. Once the strike came, these community boards yielded great support and served as spaces for coordination. Following the strike, the group evolved into what is now called the Grassroots Education Movement (GEM).  The group includes unions representing school workers like CTU, UNITE HERE and SEIU Local 1, community organizations like Action Now, the Kenwood-Oakland Community Organization (KOCO), and other neighborhood-based organizations.  Chicago Jobs with Justice is also a part of GEM. The groups are demanding a moratorium on ALL school closures, and are standing up against attempts to further privatize and profit from public education.

In Philadelphia, an effort is underway to sustain a unified movement as well.  Due to the unnecessary  crises facing all families and children who deserve a quality public education, community groups representing students, parents, communities and educators have come together to coordinate efforts and support each other around shared values and principles for community-centered, strong public schools.  This effort is called the Philadelphia Coalition Advocating for Public Schools (PCAPS).   Philadelphia JwJ is a participant in PCAPS.  While only in existence for roughly one year, PCAPS promises to be a space to maintain and build greater momentum for a unified movement for quality public education in Philadelphia.
Chicago and Philadelphia are teaching us that building appropriate formations and structures to support the development and sustaining of unity among parents, students, community organizations, and educators around a shared agenda is critical.  Both GEM and PCAPS are attempting to do this.  These structures are also important to help facilitate the development of shared political analyses of who the enemies of public education are, what their motivations are, what strategies and tactics they utilize to disorganize and separate those who have a common commitment to quality public education from each other.

Both GEM and PCAPS are highlighting the fact that there is a corporate agenda made up of corporations and corporate-created entities that promote and support strategies such as charter schools and voucher programs to intentionally under-fund and undermine neighborhood schools to strengthen the rationale for closing public schools and moving these resources to charter schools which often operate to make a profit.  This is an initial and necessary phase in the process to put public schools under the control of unelected and unaccountable corporate interests.

Formations like GEM and PCAPS also help to name the dangerous impact these practices have on the teaching profession, the teachers themselves, and the students who depend on well-trained teachers that are committed to their students and their communities.  Furthermore, these types of formations have the potential to help crystallize the destabilization and disorganization of communities of color and working class white communities that ensues when public neighborhood schools are closed and families are then forced into survival mode in order to figure out the best alternative for their students, which often entails bussing their children to schools miles away that are often no better or even worse schools than the shuttered school that once united their neighborhood.