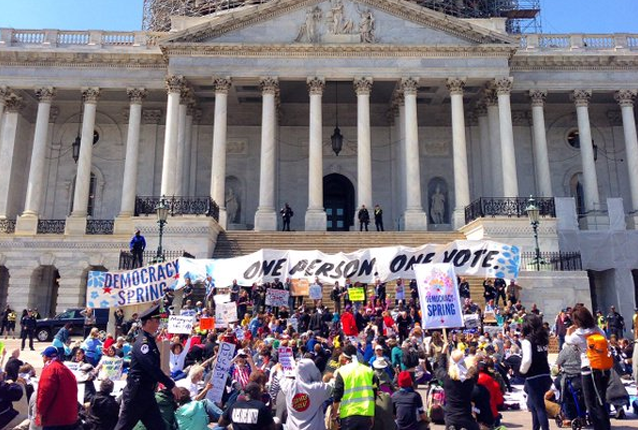 This post was written by Darryl Lorenzo Wellington, a writing fellow at the Center for Community Change.

2016 has been a particularly volatile election season.

The winds of change have swept through the electorate. Both parties have experienced “revolutions” by a voter electorate frustrated by traditional party politics and stagnated legislative action. It’s the year in which the electorate is storming the gates, haranguing lawmakers with refrains of “You’re not listening to us!”

The election season has been characterized by equal parts bigotry, paranoia, hope and idealism.  But 2016 still has the potential to bring a sea change.  It could still have the positive effect of a much-needed airing of the nation’s political dirty laundry.

It’s fitting that on April 18 concerned citizens and community leaders will descend on Washington for two separate gatherings calling for “Democracy Awakening” and fundamental changes that address the excessive monetary bias and partisanship in Washington that can no longer be ignored, excused or wished away.

The massive Democracy Awakening collective action from April 16 to 18 will bring together social justice groups, including Jobs With Justice, the NAACP, People for the American Way and Public Citizen, and over a hundred progressive organizations tackling the nation’s most pressing challenges, including immigration reform, climate change and efforts to dismantle labor unions.

“We, the people know what the solutions are. But nothing can change because of corrupting money-in-politics” says Sharon Sanders, a 76-year-old Democratic delegate in Illinois organizing buses from Illinois to Washington for the event.

A Democracy Awakening promotional video announces that after the Supreme Court Citizens United decision opened the floodgates allowing corporations to pour uncanny sums into national elections  “it’s time for us to fight back on a scale that’s never been done before.” The video lays out the exorbitant costs that preclude the average American from running for or holding public office. For example, a U.S. Senate campaign now costs on average $8 million. Few Americans can aspire to higher office, while since 2010 the sanctity of the right to vote has been undermined by a spate of restrictive ID laws. The Supreme Court has eroded trust in the ballot box by striking down provisions that have protected minority voting rights since the days of Jim Crow exploitation.

“We can’t restore justice in the legislative process in Washington until we can also protect democracy on the front end in the voting booths,” said NAACP President Cornel Williams Brooks, in a tele-conference in advance of the action, explaining how Citizens United and undermining minority voting rights go hand in hand.

Aquene Freechild, co-director of the rally, says, “We are months away from an election that really brings out the sense of general alienation. Every day people in America drink polluted water but don’t have the political clout in Washington the polluters have. We haven’t had a fundamental conversation over rights in America since the civil rights movement 60 years ago. I want for the leadership in both parties to have to explain their inaction on bills that are fundamental to working democracy.” The bills supported by Democracy Awakening include The Voting Rights Advancement Act, which restores the protections of the Voting Rights Act of 1965, and The Democracy For All Amendment, which strikes down Citizens United.  “Both parties have to be put on the defensive. And yes, the gathering will include civil disobedience,” Freechild says.

While committed progressives call attention to a broken political system, another set of advocates will be in front of the Supreme Court on April 18. The Supreme court that day will hear oral arguments over the Deferred Action for Childhood Arrivals (DACA) initiative and the Deferred Action for Parents of Americans and Lawful Permanent Residents (DAPA), which are the linchpins of President Obama’s efforts to enact immigration reform.

The tensions that led to this legal challenge escalated after President Obama’s work to pass immigration reform legislation stalled in Congress. The president responded by providing immigration relief through executive orders that could impact the lives of four million immigrants, by providing relief from deportation. Obama’s administrative reforms were subsequently challenged in court by conservative state governments. The essence of the oral arguments will be over whether the president has the legal authority to issue these executive orders.

Immigration Field Director at the Center for Community Change Sulma Arias says, “The case has the potential to be historic. But losing this case would be a tremendous setback. That would have terrible repercussions on immigration reform, and on the immigrant community’s relationship with the Republican Party, because we know that this challenge to Obama’s reform package was brought by a Republican majority.”

The voices of the people will be echoing over these three days, resounding in Washington, but outcomes depend upon the men and women inside the halls of the Congress and the Supreme Court. Will they be listening?

Darryl Lorenzo Wellington was a parking lot attendant in Savannah, Ga., before switching careers in his late 30s. Since becoming a freelance writer, he has covered post-Katrina New Orleans, poverty exploitation in the plasma industry and the Charleston massacre. His work has appeared in The Nation, The Atlantic, Dissent, The Progressive, and the anthology MFA vs NYC. Darryl lives in Santa Fe, New Mexico. Darryl is also a writing fellow at the Center for Community Change.