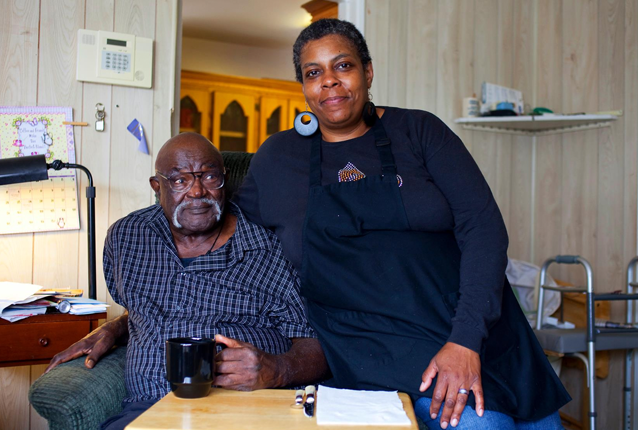 The Supreme Court will issue a decision this month that could repeal collective bargaining rights for home-care workers. Learn the potential impact the ruling could have on care workers, care consumers and working people.

You can make your voice heard by adding your name to our petition and stand with these caregivers now!

What is the Supreme Court case Harris v. Quinn about?

On October 1, 2013, the U.S. Supreme Court granted a hearing in the case Harris v. Quinn. The case was brought by the National Right to Work Legal Defense Foundation (NRTW), an extremist group with ties to the ultra-conservative Koch Brothers and ALEC. This case is the latest in a decades-long right-wing attack on the rights of working people to join together to improve their jobs and the quality of services they provide.

The NRTW lawsuit started as a specific challenge against Illinois home-care workers’ collective bargaining rights, but the case has now expanded to attempt to repeal the right of all public sector home-care workers from banding together and collectively bargain with states over core terms of their employment. In the suit, NRTW is also asking the Supreme Court to bar other independent care providers, like family child-care providers, from forming a union by arguing that independent providers are independent contractors – and not public service employees – who cannot bargain collectively. The lower courts have already rejected this argument.

When is a decision expected from the Supreme Court on Harris v. Quinn?

The decision could come at any point between next Monday and the end of the month.

As more states are allowing Medicaid to fund in-home care, millions of paid caregivers deliver home-based care for children, the elderly and people with disabilities. From administering medicine to preparing meals, home-care workers allow the millions of people they care for to live independently at home with dignity and respect. Despite an increasing demand for home-based care providers, this workforce – made up of mostly women, immigrants and people of color – faces low pay, few benefits and little job security. The median hourly wage for home-health and personal-care aides is $9.70 an hour.

Why don’t all care workers have collective bargaining rights?

The 1935 National Labor Relations Act gives most private sector employees the right to form unions and collectively bargain with their employers. The federal law does not, however, extend to public employees, although most states have laws that grant union rights to public sector employees as well. But for those workers in the gray area of providing home-based care and receiving reimbursements through state and federal programs, there was no established structure in which to form unions. While the consumers of this care or their family members typically do the hiring and often supervising of these workers, a significant percentage of the workers receive their income through state or federal reimbursements (largely Medicaid). So these care workers couldn’t be categorized as independent business owners since they have no control over the reimbursement rates, but they weren’t employed by the private sector either. Still, state governments were ignoring their obligation to serve as the “employer of record” for providers.

How did care workers gain a voice on the job?

Despite the structural impediments, care providers began joining unions anyway to secure a voice on the job. And since the 1990s, care workers and their unions began mobilizing consumers and other allies to pressure elected officials to raise reimbursement rates and create public authorities that controlled state and federal funding streams and could recognize and bargain with providers’ unions. Now, as of 2013, nine states have granted rights to home-care providers.

How could this case affect the people that home-care workers care for?

The dismantling of union rights for providers would also be a blow to the consumers of care who benefit from a stable workforce – studies have shown that increased wages and benefits lead to reduced turnover among home-care providers. With the demand for home care predicted to soar in the coming years as baby boomers age, a decision limiting these rights will compromise care standards at the moment our aging nation needs it most.

What are the implications of the case on income inequality and economic justice?

A decision limiting these rights could also directly drive down the wages and the basic rights of care workers. Public workers could have fewer resources to stand up for good jobs and quality care. If our friends and neighbors can’t join together in strong unions, it will become harder for all workers to gain better wages and benefits, increased job security and safer workplaces. We all need the freedom to have a voice at work and to speak up for decent jobs and quality services.

The Supreme Court will issue a decision in the coming weeks – and possibly as early as this Monday. Click here to sign our petition to stand with care workers! We will deliver your petition to the workers who could be hit hardest by this ruling.