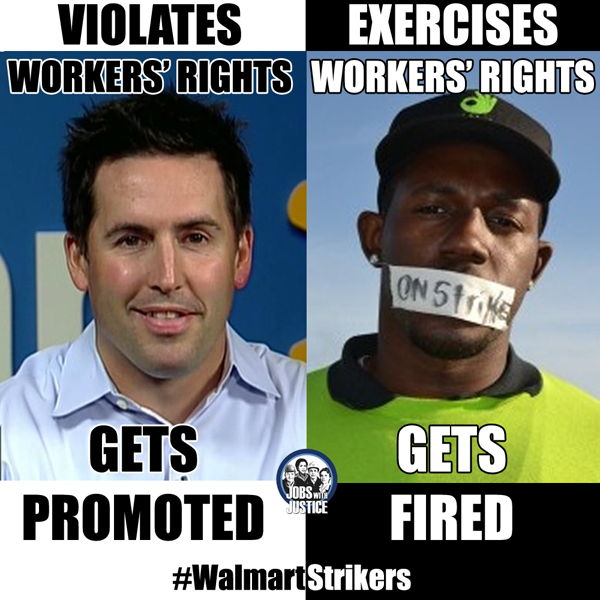 On November 18, 2013, the National Labor Relations Board (NLRB), the federal agency charged with protecting workers’ rights to collective activity, launched a nationwide prosecution against Walmart. The NLRB is pursuing multiple charges against the company, alleging it illegally retaliating against 117 employees in stores across the country. The General Counsel’s office plans to prosecute Walmart for violating the law by firing or disciplining those who engaged in legally protected strikes. Additionally, the NLRB charges that Walmart violated the law by threatening workers that there will be consequences if they go on strike.

The NLRB specifically charged that Walmart spokesperson David Tovar, when he appeared on national television in November 2012, illegally threatened associates with potential disciplinary action if they engaged in job actions on Black Friday. Walmart just promoted Tovar to VP of Corporate Communications.

Over the course of the past two years, as we documented in our May 2013 report, Walmart associates who have joined OUR Walmart, or otherwise acted collectively to address concerns about working conditions, report being targeted by management with harassment, threats, changes to their jobs and working conditions, and retaliatory discipline, including termination. By last spring, OUR Walmart had received more than 150 incident reports where workers allege their rights were violated—primarily as a result of 2012 Black Friday strikes and related actions.

It is very rare for the NLRB to pursue a nationwide case against a company. Clearly, Walmart’s extreme tactics to shut down its employees’ efforts to stand up has warranted this response from the NLRB. This ruling should send a signal to Walmart’s leaders that the company is not above the law. The company’s centralized strategies to suppress collective action must be met with a centralized approach from the federal government. We applaud the NLRB for taking that approach.

Sarita Gupta, executive Director of Jobs with Justice and American Rights at Work, issued the following statement in response to the NLRB’s decision:

“The Labor Board took a rare step today to pursue a nationwide complaint against Walmart. The Board’s decision to prosecute confirms that the law is catching up to the company, and underscores what Walmart associates have long known: the company is illegally trying to silence employees who speak out for better jobs.

“There are reports of Walmart’s shelves going un-stocked, board members resigning, and a massive public relations campaign to repair the company’s image. But the chinks in Walmart’s armour are mounting, and the message is clear: there’s a real cost to low prices, and workers are paying the consequences.

“Americans believe that we have the responsibility – and the right – to speak out against corporate abuses of workers. Customers, clergy and community members from across the country are standing with Walmart workers bravely calling for better jobs and a stronger economy for all of us. As the peak retail season approaches, we’re proud to stand with the working people who are asking Walmart to do right by its employees.”

The NLRB decision to prosecute Walmart confirms what workers have long known: the company is illegally trying to silence employees who speak out for better jobs. Americans believe that we have the responsibility – and the right – to speak out against corporate abuses of workers, and this proves we’re finally being heard, and making chinks in Walmart’s armor. Customers, clergy and community members from across the country are standing with Walmart workers bravely calling for better jobs and a stronger economy for all of us.

For Walmart workers awaiting this NLRB decision for months, this is long-awaited vindication that they’ve been exercising their legally protected right to strike. However, the fact that it comes months after Walmart engaged in this retaliation points to the need for community allies to stand with Walmart workers who speak out. If the federal government can’t be there the moment someone is unfairly fired for going on strike or standing up, then we need community leaders to stand with those brave workers. If Walmart feels enough public pressure, the company may decide to follow the law and respect their employees’ right to collective action.