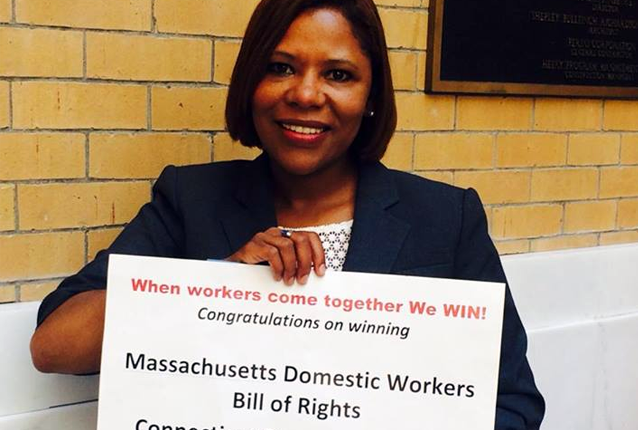 But the Massachusetts bill is the most comprehensive domestic workers Bill of Rights yet, providing clear guidelines for employers; codifying the workers’ right to a written contract, just cause termination and maternity leave; and affording workers additional protections by bringing them under the coverage of the Massachusetts Commission Against Discrimination.

The best part of this victory is that domestic workers were on the front lines of this win. It was their leadership, experience and stories that helped set into motion a legislative plan to change the landscape for this low-wage workforce. This victory was made possible because of strong partnerships between workers, employers, advocates and legislators who came together through the powerful Massachusetts Coalition for Domestic Workers, as well as the more than 80 other endorsing and supporting organizations engaging in the campaign. The large-scale grassroots campaign that carried the bill was four years in the making.

Natalicia Tracy, Brazilian Immigrant Center executive director and co-founder of the coalition, noted, “Massachusetts Jobs With Justice played a powerful role in this effort by directly supporting activities at the state house, specifically in the education of legislators about the importance of the bill. JWJ also promoted the campaign and brought it visibility by sharing information across their networks.  The coalition and the movement benefitted greatly from the efforts of a broad range of JWJ staff, who always recognized the urgency of changing exclusionary labor policies that were vestiges of slavery and Jim Crow in this country.”

This win is also part of a wave of strong low-wage worker organizing spreading across the country. The same week that Massachusetts passed the Bill of Rights, the state also passed the highest minimum wage law in the country.

The domestic worker bill in particular is even more significant in the wake of the Supreme Court’s recent Harris v. Quinn decision. As the nation’s highest court attempts to erode the right of workers, strategies that incorporate innovative policy solutions and strategic organizing tactics will ensure that the workers’ rights movement will still be able to come together to help transform workplaces.

Passing the Bill of Rights, of course, is not only a history-making end, but also a beginning. Just as strong solidarity and collaboration in the movement were necessary for passing the bill, its implementation and enforcement will also require all allies to work together to see that it becomes not just another law on the books, but a reality, one that changes our culture and brings more genuine respect and value to the contributions these workers bring to families and communities everywhere.