Labor Keeps Up the Fight in the Public Sector 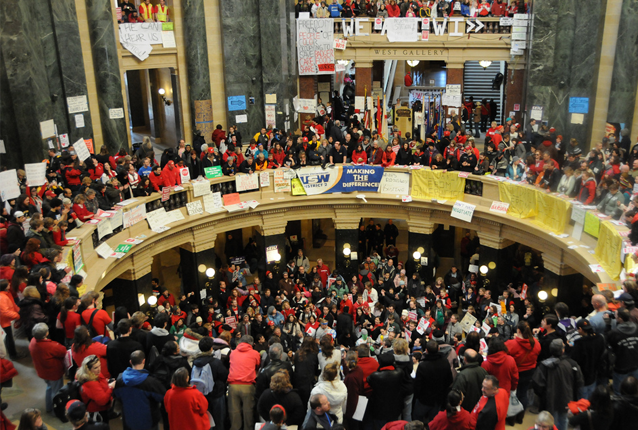 It’s no secret that teachers, firefighters and other civil servants are under attack from extremist politicians and the billionaires bankrolling them. And as Wisconsin Governor Scott Walker moves to run for president in 2016, more hardworking women and men are reckoning with the possibility of a national anti-worker agenda. Walker’s landmark 2011 bill, Act 10, stripped most public sector employees in Wisconsin of the right to collectively bargain, setting off a wave of assaults on the ability for people employed in state and local governments to have a say over their working conditions.

At the recent Labor Research and Action Network (LRAN) conference on June 16 a number of local and national experts shared their analysis and strategies for strengthening the voices, engagement and organizing of public employees to hundreds of labor scholars and organizers.

Donald Cohen, Executive Director of In the Public Interest shared his viewpoint that restoring faith in government and public institutions is critical to public employees reclaiming their financial and democratic power back from corporate-controlled politicians.

Many public sector employees and their unions have begun aggressive campaigns to hold the line for their families and communities. These campaigns have come in many forms, including large organizing efforts and intentional member development.

The American Federation of State, County and Municipal Employees (AFSCME), for example, launched its “AFSCME Strong” initiative to boost the ability of women and men working in public sector jobs to join together in a union and continue to cultivate its existing members. According to President Lee Saunders, so far they have recruited 140,000 new members, including many homecare aides. With the Supreme Court decision in Harris v. Quinn threatening to lead to a right-to-work economy, AFSCME has moved to increase its organizing efforts, both internally and externally, explained to the LRAN conference. This includes continuing to educate its members on the purpose of political and legislative action.

Milwaukee Teacher’s Education Association (MTEA) President Bob Peterson minced no words when he issued a warning to audience members: “I’m from Wisconsin; I’m from your future.” As a result of Act 10, union membership in the state has declined by more than 18 percent since 2010. Public employees are taking home lower wages, leading to economic decline as fewer items are purchased. The MTEA and its members have responded to anti-worker politicians restricting collective bargaining rights by switching to a model of social justice unionism, according to Peterson. Under this model, the union has focused on building member investment and forming partnerships with worker centers in Milwaukee’s Latino and African-American communities. MTEA members have purposefully stood in solidarity with groups organizing around public sector issues beyond education. “We can’t fix the schools without fixing our communities,” he explained.

Jobs With Justice Executive Director Sarita Gupta agrees with this analysis, and in concluding the discussion spoke of the need for a broader community of organizations to invest more deeply in marshalling support for those who work in the public sector: “Many of us have mobilized in solidarity but haven’t quite figure out how to embrace [the fight in the public sector]…it’s such an important part of making sure that we have a real democracy.”