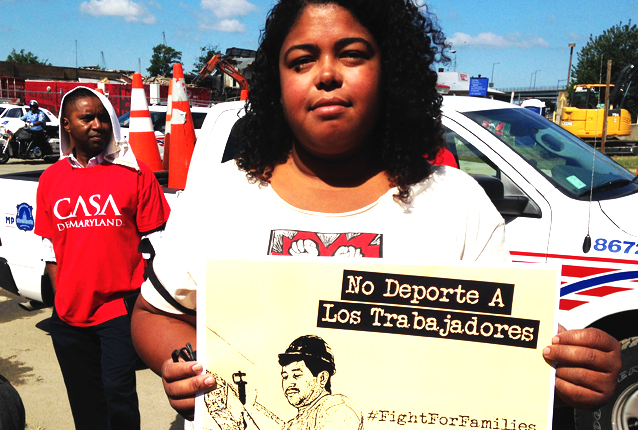 After years of pressure on policymakers to fix the broken immigration system, families and communities finally have hope for some needed relief. President Obama has promised to use his executive authority to grant immigrants relief and to reform harmful enforcement procedures. However, the question remains whether it will go far enough to alleviate the suffering of millions of immigrant families and workers.

Today, Jobs With Justice leader, Scarlet Jimenez, joined hundreds of labor, faith, student and community leaders in an action of civil disobedience in front of the White House to demand that the Administration’s forthcoming immigration policy overhauls include all 11 million undocumented immigrants and ensure our nation’s most vulnerable workers are protected.

In explaining why she took such an important stand, Scarlet Jimenez shared:

“I am getting arrested today for the workers I have seen stick their neck out to report abuse on the job and to improve working conditions. Workers have been bravely demanding their labor and civil rights and its time this administration did something to defend them. President Obama must provide a solution for families and for workers to protect their labor and civil rights.”

It is far too easy for bad employers to report workers who attempt to organize or blow the whistle on abusive working conditions. As a result, most immigrants are scared to exercise the rights that they hold under our federal labor and employment laws because they risk getting fired or deported, despite their employer’s lawbreaking. If we can eliminate or neutralize workers’ genuine fear of Immigration and Customs Enforcement (ICE), than they will be more willing to speak up, to blow the whistle on unsafe, unjust conditions, and to organize for better jobs for all of us. This is why President Obama has the responsibility to ensure workers protections are part of the fix to the broken immigration system.

See how you can get involved to demand real relief at www.allinfor11million.com, www.stopseparatingfamilies.org, or follow the actions online via #daca4all or #fightforfamilies.